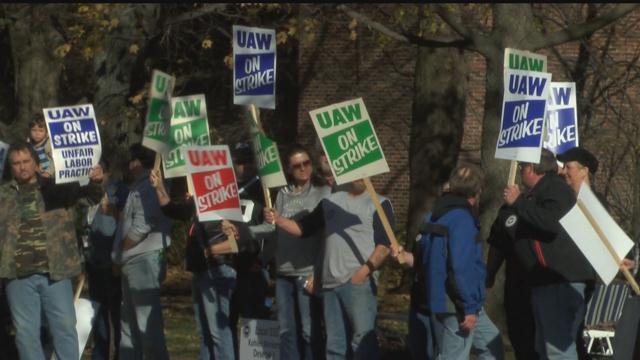 Dozens of people on strike against the Kohler Company in Sheboygan County were out before sunrise Monday morning.

The strike began after union workers rejected what the company called its final offer.

CBS 58 has been investigating the potential impact of this strike on the area. Almost 2,000 Kohler employees are represented by the United Auto Workers who voted to go on strike Sunday, the first strike at Kohler since 1983.

Employees are fighting equal pay and a raise to make up for higher healthcare costs.

Portable lights are set up and some signs are lined with LED lights, possibly a sign employees are ready to take their strike into the night.

A Marquette University professor says this strike could end quickly and cause very little impact on the local and state economy. Professor Cheryl Maranto also says companies have used large employee union strikes as a way to move jobs to areas with cheaper labor.

If that happened in Wisconsin, Maranto says it would have a devastating impact. She says since the company has such deep roots in this community she's hoping jobs aren't moved out of Wisconsin.

However, Maranto also says unions don't have as much leverage during a strike as they did just ten years ago, "I mean I doubt they would really want to put their jobs in jeopardy and that they are thinking this really is a way to pressure the company to take another look and hopefully provide a better offer than what they have done so far."

Sheboygan County Sheriff Deputies are directing traffic outside Kohler Company as employees walk across the road leading into the plant. However, pickets are allowing cars to go in and out of the plant.