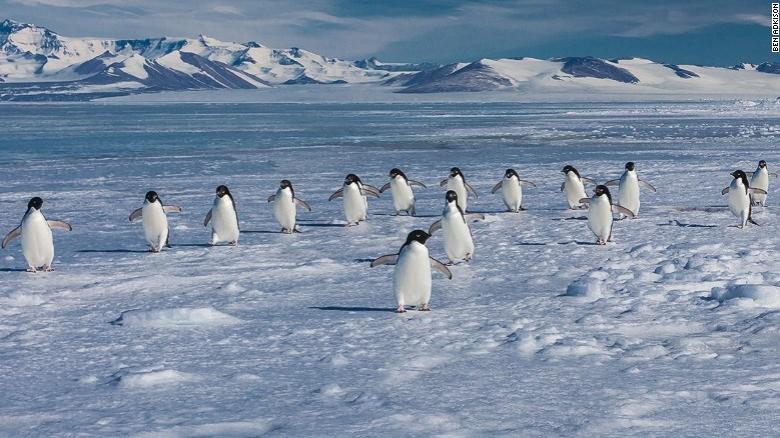 (CNN) About 150,000 penguins have died since being stranded by a vast iceberg that became lodged off the coast of Antarctica six years ago, according to the journal Antarctic Science.

Combined with expanding ice, the B09B iceberg, which at 1,120 square miles is almost the size of Rhode Island, has cut off the Adelie penguins' food supply and changed the landscape of their home, according to a February report in the peer-reviewed journal published by Cambridge University Press.

The towering mass of water ice first ran aground into the penguins' habitat of Cape Denison in Commonwealth Bay in 2010. Before that it was floating along the coast for nearly 20 years before colliding into the bay. The iceberg essentially has landlocked the penguins, forcing the animals to trek across a desolate stretch of nearly 40 miles to find food.

"The arrival of iceberg B09B in Commonwealth Bay, East Antarctica... has dramatically increased the distance Adélie penguins breeding at Cape Denison must travel in search of food," said researchers in the report.

Since 2011, the colony's population has fallen dramatically, according to the Climate Change Research Center at Australia's University of New South Wales.

The outlook for the Cape Denison Adelie penguins remains dire. Unless the colossal iceberg is broken up by sea ice, scientists predict the colony will disappear in 20 years.

About 5,500 pairs are still breeding in the area, but there has been a significant decline in their population compared with a century ago, according to estimates based on satellite images and a census in 1997.

However, it isn't the end for all Adelie penguins. About five miles from the Commonwealth Bay, another colony is thriving, which leaves scientists to conclude that the iceberg has had a direct impact of the species that is now landlocked. About 30% of the Adelie penguin population lives in East Antarctica.

Research on the iceberg's impact on the Adelie penguins can give scientists insight into the wider implications on the effects of increasing sea ice in the area.

Long-term environmental changes are projected for the Southern Ocean, which will likely affect marine predators, according to a 2015 report published the peer-reviewed journal BMC Evolutionary Biology. Environmental shifts because of climate change could also affect the breeding habitats of land creatures, finding food in a marine environment and the availability of prey for larger predators.