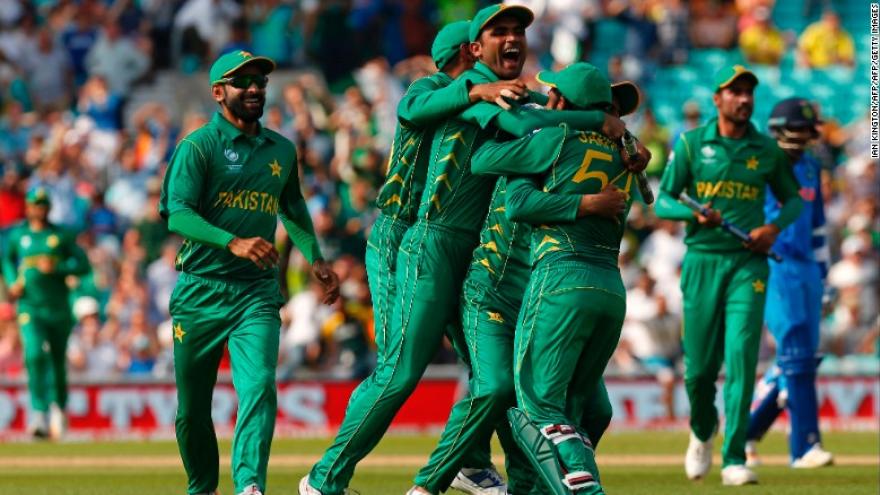 The men, all of whom are Muslim, were arrested Monday after their Hindu neighbors complained about the group's antics during India's crushing loss to their arch rivals in the ICC Champions Trophy final the previous day.

Fourteen men, aged between 19 and 35, appeared in court on Tuesday where they were charged with sedition and criminal conspiracy. The fifteenth man is scheduled to appear in court on Wednesday.

Sedition is among India's most serious charges. If convicted, the men could be sentenced up to 14 years in prison. A trial date has yet to be set.

"We have some videos regarding the arrests, which will be produced in court as evidence. These videos were taken by our staff and the people that were there to watch the mischief," said Pathak.

The sporting rivalry between the two neighboring countries dates to 1952, just five years after independence, when India and Pakistan played their first test series.

Defending champions India had been expected to cruise to victory against outsiders Pakistan during the much-anticipated final Sunday.

India had already beaten Pakistan, the world's eighth-ranked team, in the earlier stages of the competition.

However, an unpredictable Pakistan stunned India, beating the holders by 180 runs.

Not the first time

According to Pathak, similar incidents between the two sets of fans have occurred in the past.

"This has been happening for several years, whenever there is an India-Pakistan match. We don't have any previous cases or official complaints on record but those residing in Mohad have told us that this has happened before," he said.

Following the arrests, security was ramped up to calm rising tensions.

"Mohad is a small village on the state border and this is a Muslim-dominated village. There are around 300 families that reside there, out of which only 15 or 20 are Hindu," Pathak said.

In 2014, a group of 67 college students from Kashmir were charged with sedation while watching an India-Pakistan clash at a campus hostel in Uttar Pradesh, though the charges were eventually dropped.

Across the border, a Pakistani man was arrested in 2016 for waving an Indian flag as his sporting hero Indian captain Virat Kohli scored a century.