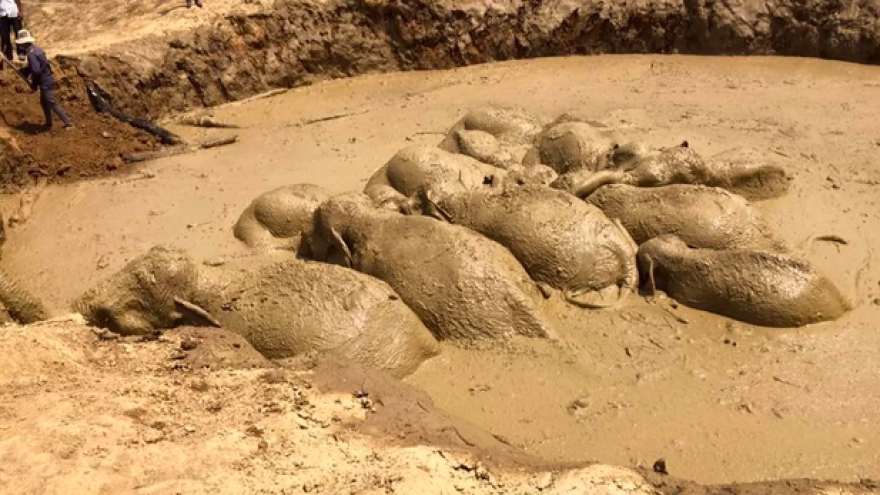 (CBS) A rescue in Cambodia saved 11 Asian elephants from a muddy death after they fell into an old bomb crater.

The herd — three adult females and eight juveniles — was discovered in the large crater in Keo Seima Wildlife Sanctuary on March 24, covered in mud and unable to escape, according to the Wildlife Conservation Society (WCS). Local farmers notified the Cambodian Department of Environment, which called in the WCS to save the unfortunate pachyderms. [Watch Video of the Muddy Elephants Rescued from Pit]

“Too often, the stories around conservation are about conflict and failure, but this one is about cooperation and success,” Ross Sinclair, the country director for WCS in Cambodia, said in a statement. “That the last elephant to be rescued needed everyone to pull together on a rope to drag it to safety is symbolic of how we have to work together for conservation.”

The rescued elephants live in the Keo Seima Wildlife Sanctuary, a protected forest in eastern Cambodia in the foothills of the Annamite Mountains. According to the WCS, there are more than 60 species in the protected area that are threatened or near-threatened, or that may be threatened but are too poorly understood for scientists to be sure. The Asian elephant (Elephas maximus) is endangered, largely due to habitat loss, poaching and conflict with farmers.

In Keo Seima, though, it was farmers who saved the elephant herd. The animals became stuck in the Vietnam War bomb crater when they entered it to bathe and drink. The crater had been widened for use as a retention pond. When rescuers arrived, they fed and watered the elephants while digging a ramp into the side of the crater so the animals could escape.

In video of the rescue, elephants are seen pushing each other up the slippery ramp with their heads and trunks. Elephants are known to be both social and cooperative; a 2011 study of Asian elephants found that they could coordinate their actions in pairs to get food. These elephants may also console each other when distressed, researchers reported in 2014 in the journal PeerJ.

The last elephant remaining in the crater, with no herd members to push it out, got a little help from people at the scene, who pulled the animal out with ropes. The elephants, which had been trapped for days, were freed within a few hours.

“These elephants represent an important part of the breeding population in Keo Seima Wildlife Sanctuary, and their loss would have been a major blow to conservation,” Tan Setha, the WCS technical advisor to the sanctuary, said in the statement.

There are an estimated 40,000 to 50,000 Asian elephants spread across India and Southeast Asia, though population counts are hard to pin down because the animals’ habitats are so remote and densely vegetated, said the International Union for Conservation of Nature. Despite the uncertainty, biologists and conservationists have said that the general trend is toward Asian elephant populations shrinking.