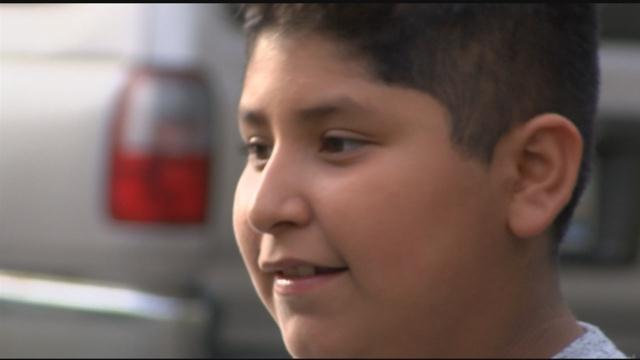 Inside a home on Milwaukee's south side is where Alfredo Bautista, 10, was scarred for life.

\"I was shaking and I was all red because I didn't know what happened,\" he said. \"When my dad carried me he saw blood dripping off his hands so right away we called 911.\"

He was asleep in his bed on August 9th when he was hit in the leg by a stray bullet.

The holes are still visible on house. Investigators counted at least 41 rounds.

\"We can tell you that at least five firearms were used that night,\" said Milwaukee Police Capt. Alfonso Morales.

Milwaukee police said a fight between two groups led to a shootout near 20th and Lapham. Officers call it a reckless act of violence in a neighborhood full of families.

\"Some of the people of interest have ties to narcotics, ties to groups,\" said Capt. Morales. \"I don't know if I want to call that a gang yet.\"

But police and concerned community members are calling on witnesses to speak up. Attorney Micheal Hupy has put a $25,000 reward on the table for information that leads to an arrest and conviction.

\"Someone else could be shot and it could be a child, an innocent child,\" Hupy said.

The city has witnessed those tragic cases before. Sierra Guyton, Layla Petersen and Bill Thao all lost their young lives after being caught in the crossfire of brazen criminals.

Luckily, Bautista lived, but now his family's life will never be the same.

\"I don't know why they thought it was our house and we're just trying to find a new home,\" he said.

If you have any information to help bring justice to the Bautista family, please call Milwaukee Police at (414) 935-7360.