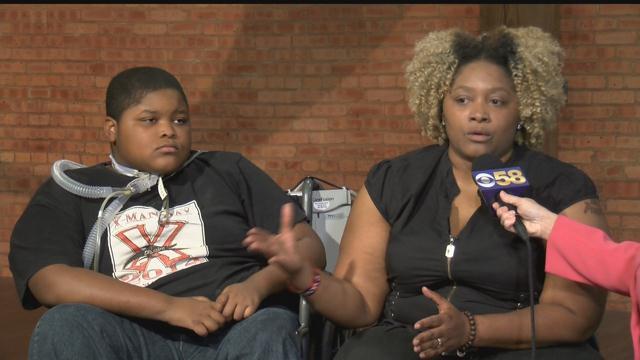 On Saturday, October 10th, The X-Man Foundation is hosting its annual  'Walk for Awareness' starting at that very crosswalk where Xzavier Davis-Bilbo became paralyzed and dependent upon a respirator to continue his life.

The driver who injured this five year old was texting so she didn't notice that her vehicle had crossed out of her lane and struck an innocent child ripping him from his sister's hand. This driver was texting.

X and his mom hold this walk on or near the anniversary of October 10th every year because her survived and drivers need to meet him to realize that watching the road should take precedence over whatever is on a cell phone.

Viewers of the CBS 58 News at 4 p.m. got to meet mother and son during the regular segment called "Our Stories with Michele."

The weekday feature brings attention to local groups and activists who are trying to make the community a better place.

Valetta Bradford, the mother of Xzavier started the X-Man Foundation in order to educate drivers away from distracted driving.

The pair go out to schools on a regular basis to meet with young people who are just starting to drive.

While Xzavier  has shown an incredible strength of character, there are daily hardships to living on portable life support.

Paralyzed and now starting to lose use of his right hand, the restitution ordered by the court covered less than %10 of medical expenses.

Saturday's event starts at 10th and North at 11 a.m. The group will starting walking around 11:45 a.m. and the eight block route includes the four way stop that the driver who was texting never saw and where X's life changed forever.

X and his mom are struggling recently after his motorized wheelchair broke down.

X says the hardest thing is to go to rehab and look at drivers on either side that are texting behind the wheel.

We've attached video of the interview that aired on the CBS 58 News at 4 p.m.