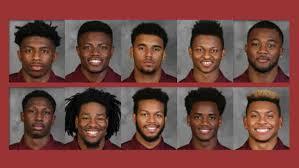 (CBSNews) MINNEAPOLIS — The University of Minnesota has suspended 10 football players indefinitely from all team activities.

Lee Hutton, a lawyer representing several of the players, tells the Minneapolis Star Tribune that that the suspensions stem from an internal university investigation into an incident on Sept. 2, hours after the season began. The unspecified incident also led to a police investigation, as well as a restraining order filed by a woman the paper reports is part of the team’s game day operations against defensive backs Ray Buford, KiAnte Hardin, Dior Johnson, defensive lineman Tamarion Johnson, and running back Carlton Djam.

Four of those players -- Buford, Hardin, Johnson and Johnson -- were reportedly suspended the following week
for an unspecified violation of team rules, but reinstated after Hennepin County prosecutors declined to press charges in the case.

The restraining order was lifted after a settlement on Nov. 2. That day, the alleged victim reportedly gave a statement in the Hennepin County Courthouse, saying: “I’m glad this is over. This has never been about punishing anyone, I just wanted to feel safe. Because of this resolution that we came to, now I do.”

However, on Tuesday night, the school announced that the four players had been suspended again, along with Djam, defensive backs Antonio Shenault and Antoine Winfield Jr., running back Kobe McCrary, and quarterbacks Seth Green and Mark Williams.

Minnesota plays Washington State in the Holiday Bowl on Dec. 27, and it would appear to be unlikely that the players would be available to play in that game.