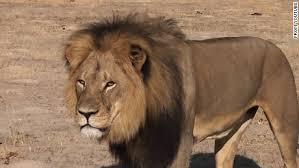 There has already been ample publicity surrounding the lion's death, said the country's minister of environment, water and climate, Opa Muchinguri.

"If you talk to him, tell him that tourists are welcome here," she said. "No hunting, though."

Palmer faced threats and saw worldwide protests unfold, including demonstrations outside his suburban Minneapolis office, after the Zimbabwe Conservation Task Force reported that Cecil was lured out of a national park and shot with a compound bow.

"I had no idea that the lion I took was a known, local favorite, was collared and part of a study until the end of the hunt," Palmer said in a statement in late July. "I relied on the expertise of my local professional guides to ensure a legal hunt."

Two Zimbabweans have been charged in the case, and before Monday, officials there had said they wanted Palmer extradited to face charges.