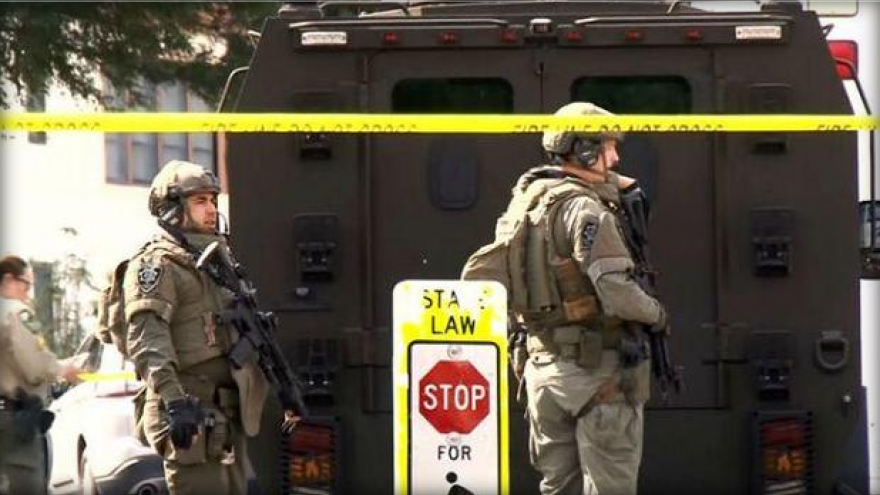 YOUNTVILLE, Calif. -- An 8-hour hostage situation at a veteran's home in Yountville, California had a "tragic" end, with four people being found dead, said Chris Childs of the California Highway Patrol. The bodies of three women and a man, believed to be the suspect, found in the room they believed the hostage situation was taking place.

Law enforcement officers surrounded the hillside veterans' home. Hillside Medevac helicopaters are standing by, and  hostage negotiators have been trying to make contact with the gunman in the room he burst in Friday morning.

"He is armed with M4-style rifle," came on the scanner, according to Broadcastify. "Fifteen to 30 shots fired against a deputy"

Shots rang out just after 10 a.m. Friday, with witnesses say a gunman walked into a party on the campus.

"We are approaching this as active shooter situation there have been shots fired exchanged with deputy," said Napa County Sheriff John Robertson.

Police, SWAT teams, FBI and agents from the Department of Alcohol, Tobacco and Firearm (ATF) swarmed the grounds -- as the gunman, dressed in body armor and armed with assault rifle and tactical goggles took a clinical worker, psychiatrist and executive director hostage in building G.

"My heart was pounding," said Nancy Nittka, a volunteer in a different building. "They told us to close our blinds, doors and windows."

"Snipers have been given the green light," came on the scanner via Broadcastify.

Sniper teams were reportedly given permission to shoot.

"We have him confined to one room, there are three different tact teams on site in the building keeping him in that location," said California Highway Patrol assistant chief Chris Childs.

SWAT teams, using cameras, tried to look in the window where the gunman was holding the three hostages.

The hostages are Pathway House employees, Childs said. The Pathway Home is a privately run program on the veteran home's grounds that treats veterans of the Iraq and Afghanistan wars with post-traumatic stress disorder.