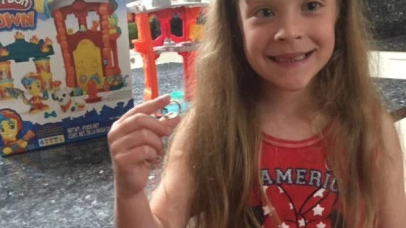 QUEENS, NY -- (WTVR) A 6-year-old girl got more than what she expected when she opened a birthday present and, to her surprise, found a wedding band at the bottom.

Cassidy Reilly and her four-year-old brother Connor dug into the box of Play-Doh and found a ring, a small sized wedding band, at the bottom, WPIX reported.

Cassidy was quite surprised at what she found and figured it belonged to someone who lost it. She immediately handed it to her grandmother Pat.

"It must have fallen off a workers finger as he or she packed the toy for shipping," she theorized.

Pat called Hasbro — the manufacturer of Play-Doh — in Rhode Island. They wanted her to send them the ring, but Pat feared it would sit in someone's office. Instead she decided to post a photo on social media hoping it would lead to the ring's rightful owner.

The story since has gone viral.

Cassidy played with the ring which was too big for her own finger, giggling over the attention her birthday surprise has been receiving.

The family has given all the information to Hasbro. The company can help return the ring, that may have some sentimental value, to its rightful owner.