"You are not invincible": Officer pens emotional letter after teen caught speeding 100 mph 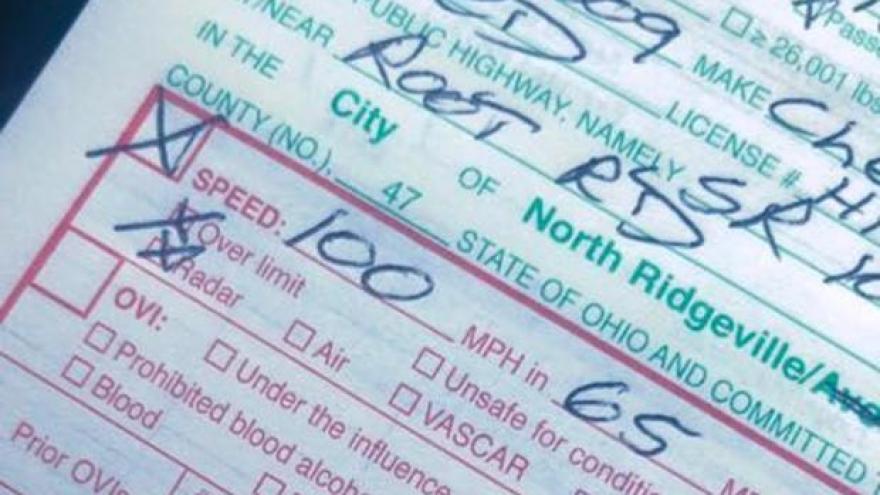 (CBS NEWS) -- An Ohio police officer stopped a teen driver going 100 miles per hour in a 65 zone, and then penned an emotional letter to the 18-year-old, warning him about the dangers of reckless driving. The North Ridgeville Police Department shared the officer's note on Facebook and it quickly gained widespread attention. The officer was brutally honest, and many people praised him for his powerful words to the young man.

The officer addressed the message to "the 18 year old kid I stopped on SR 10," and told the teen "You're welcome."

"I'd like to believe that you were minutes away from creating an unspeakable Christmas tragedy when I stopped you," the officer wrote in the letter posted on Facebook. "If not only killing yourself, you were well on your way to killing some innocent person who was minding their own business doing nothing else wrong but being in front of you."

The officer's message is drawing attention to a harsh reality: teens aged 16 to 20 have more fatal crashes and more injury- and property-damaging crashes than any other age group, according to a recent study. Researchers from UCLA concluded that "the relatively high accident rate of younger drivers (especially male drivers) is most likely due to inattention to safety considerations rather than lack of technical driving ability."

In his letter, the officer said the teen told him he didn't realize how fast he was going."That's a lie," he officer wrote to the teen. "You may not realize when you're doing 45 in a 35 but you are fully aware of every mile per hour at 100."

"You realize it with every bump you hit. You realize it as you pass cars so fast the wind moves your car. You realize it every time you drift over the line and when you move the wheel the car reacts a lot quicker than you're used to. You absolutely realized it," he wrote.

The officer said the teen was scared when he was pulled over. Unfortunately, that feeling came too late – and for the wrong reason, the officer said. "You should have been scared that you were trying to kill yourself."

The officer said that while the teen driver likely felt "invincible," he's seen all too many "dead and broken 18 year old bodies" pulled from cars. "They thought they were invincible too. They weren't," he wrote. "They were gone so they missed the part where I had to tell their parents that they were dead."

"Part of your soul disappears every time you have to tell parents that their kid is dead," the officer said. Though he doesn't personally know the teen's parents, he's sure they must say "Be careful. Drive safe," every time the teen leaves the house. He told the teen to heed those warnings, so his parents don't one day hear their 18-year-old son is dead from a car crash.

The officer went on to explain that, when you leave the house, the biggest chance of dying is by a car.

"You seemed like a really nice kid who made a bad decision," the officer wrote. "I don't feel bad about this ticket at all." The police department shared a photo of the teen's ticket with the officer's letter to him. The officer said he is proud of the ticket, because the teen will be paying for it for months and will hopefully think about how it wasn't worth the speeding. It is unclear how much the ticket costs.

"I hope you slow down. I hope that when your mom tells you to 'drive safe' you make a promise to her, and yourself, that you will. I hope you can envision me sitting in your kitchen telling your screaming mother that you have been killed," the officer wrote.

The chilling letter is a reminder that, despite all the safety devices in our cars today, the number of traffic deaths is increasing.

And research suggests older teens are more likely to be distracted divers than younger teens. A study commissioned by Liberty Mutual Insurance and Students Against Destructive Decisions found older teens tend to be more distracted by their cellphone while driving. While 32 percent of high school seniors admitted using Snapchat behind the wheel only 19 percent of sophomores admitted to it, the study found.

"It may be that the tendency for teenagers is that you start cautious and you get more and more experience and if they feel more confident and more powerful, they may jump to more risky behavior," Harvard Medical School professor Dr. Beresin said about the findings.

For the teen who was pulled over in North Ridgeville, it is unclear if a cellphone was at play, but he was clearly exhibiting reckless driving and could have died, as the officer said.

To end his message to the anonymous 18-year-old, the officer simply wrote a final warning: "Slow down. Please. You are not invincible. I promise."