'Yield to Pedestrians:' Residents, advocates push for safer streets on Milwaukee's south side

The Wisconsin Bike Fed is taking to billboards, using signs and personal demonstrations to make sure everyone is watching the road.

It’s busy intersections, like the one at Cesar Chavez and Greenfield Avenue, where reckless driving and accidents are known to occur.

South Side resident and advocate Travis Hope said safety is an issue for both drivers and pedestrians.

“It gets kind of tricky, especially when you’re coming south off of Chavez because you can either go left, right, straight, or down Muskego," said Hope, who is also the volunteer president of KK RIver Neighbors in Action.

In Milwaukee’s Pedestrian Plan, Greenfield Ave from South 14th to South 22nd street is considered one of the city’s most dangerous segments.

It also notes that only five percent of commuters walked in the city, between 2011 and 2017, but made up 27 percent of fatalities in crashes.

Through its MilWALKee Walks program, the Wisconsin Bike Fed is teaming up with community groups and hosting a Yield to Pedestrians campaign.

This month, they’ll be at five locations on the south side.

“We need to reduce vehicular violence and we need to take it just as seriously as we would anything else, like gun violence, Givens said.

The next Crosswalk Action is Friday, Sept. 18, and advocates want residents to come out and pay attention.

“Drivers need to look out for pedestrians but also we want pedestrians to responsible too," Hope said.

The Wisconsin Bike Fed also wants all Milwaukeeans to sign up for their Pace Car Pledge.

It’s a commitment for residents to obey neighborhood speed limits and rules of the road. 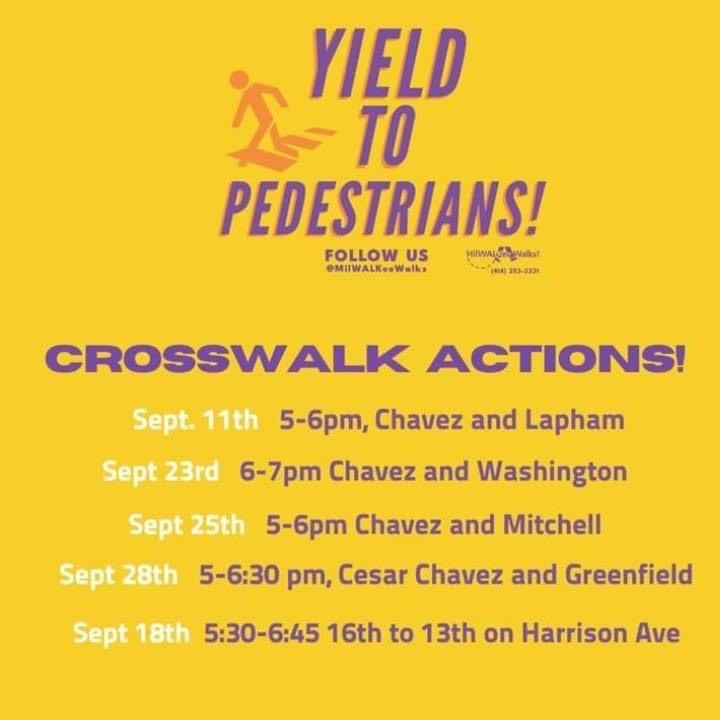