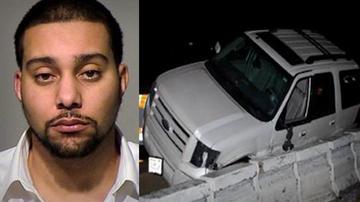 Sheriff Dispatch received a 911 call around 2:00 a.m. Saturday reporting a wrong way driver traveling southbound in the northbound lanes on I-794 over the Hoan Bridge.

While squads were responding a construction worker called 911 reporting that the driver has into a GM wall on I-794 just north of Carferry Drive.

Department of transportation video shows the suspect’s vehicle entering the freeway southbound in the northbound lanes at Lincoln Memorial Drive. He drove the wrong way for about 2.3 miles. CBS 58 will show that video when it is released by officials.

The driver, Edward Deshazer, refused to take a PBT tests at the scene, but the Cudahy man later tested a .18 on the breathalyzer machine.

He was cited for OWI-1st and reckless endangering safety, which carries a penalty of up to 10 years in prison.

Deshazer told officials that he had been drinking at Dick’s on Milwaukee Street.