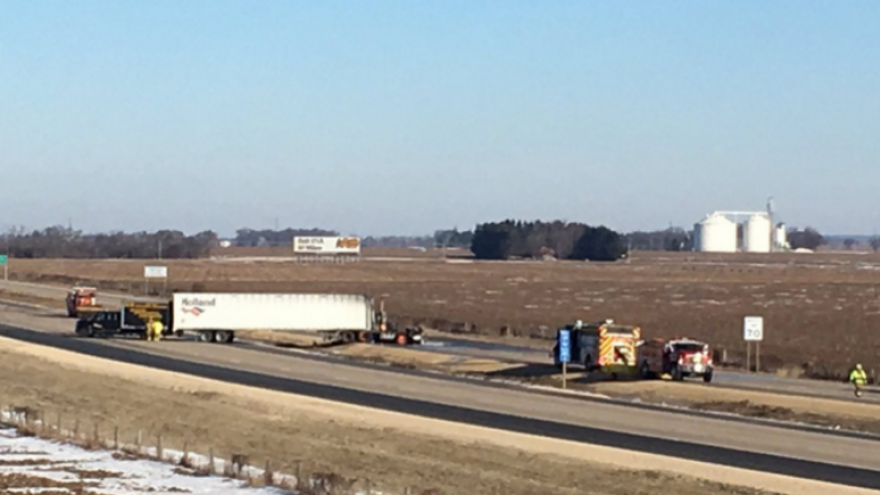 BELOIT, Wis. - (CHANNEL 3000) Interstate 39-90 between Janesville and Beloit is closed in both directions between mile marker 175 and 185 because of a deadly crash involving hazardous materials.

Wisconsin State Patrol said a Toyota Camry driver was driving the wrong way in the southbound lanes of I-39-90 when he struck a semi-tractor head-on at about 4:30 a.m. Saturday. The crash site is near Shopiere Road north of Beloit.

The Toyota driver died at the scene. The semi-tractor caught fire after the collision, but the driver was able to escape the cab on his own, according to the report.

State Patrol said the semi-trailer was carrying ethanol and peroxide. Firefighters were able to extinguish the cab fire before it reached the trailer, but the heat disrupted the integrity of the trailer's contents.

State Patrol said there is no danger to anyone at the scene. None of the barrels came open, but they had to be removed. The Rock County Hazardous Materials Response Team assisted with scene assessment and hazard evaluation. Hazchem Environmental Corp. from Addison, Illinois, responded to the scene and secured the hazardous chemicals in the trailer prior to it being removed from the interstate.

The stretch of interstate from mile markers 175 to 185 was still closed at 11:30 a.m. seven hours after the crash, State Patrols said.

A detour has been established around the accident. The State Patrol said traffic is being diverted southbound on to eastbound Highway 14. Drivers should take Highway 14 east to State Highway140, 140 south to I-43, I-43 southbound back to I-90.

For northbound traffic on I-39 I-90, take I-43 northbound to State Highway 140, 140 North to Highway 14, and 14 west back to I-39/90. The traffic diversion will increase traffic congestion around the I-90 corridor and may last for a significant amount of time.

The crash remains under investigation by the Wisconsin State Patrol accident reconstruction team.