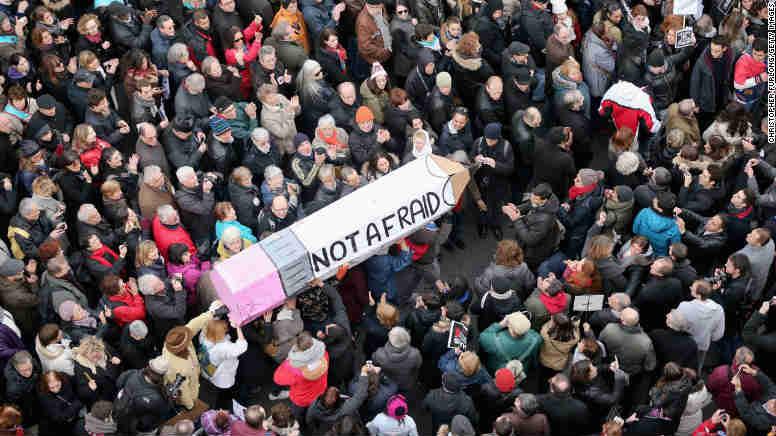 (CNN) Dignitaries and world leaders joined hundreds of thousands of people in Paris on Sunday in what government officials called a \"unity rally\" in defiance of a terrorism spree that claimed 17 lives.

French President Francois Hollande was joined by other heads of state and dignitaries -- several who linked arms.

At the very front of the march was Dalil Boubakeur, the rector of the Great Mosque of Paris and president of the French Council of the Muslim Faith.

French officials announced \"exceptional measures\" to protect not only the throngs expected to gather near the Place de la Republique in central Paris, but also a veritable who's who of foreign leaders -- a test of the security forces of a nation rocked by days of terrorist violence.

The massive rally comes as French law enforcement officers are being told to erase their social media presence and to carry their weapons at all times because terror sleeper cells have been activated over the last 24 hours in the country, a French police source who attended a briefing Saturday told CNN terror analyst Samuel Laurent.

Amedy Coulibaly, a suspect killed Friday during a deadly hostage siege at a kosher market, had made several phone calls about targeting police officers in France, according to the source.

Cazeneuve and other officials said 2,300 police officers, as well as paramilitary forces, would be deployed Sunday. The dignitaries and leaders will be protected by special units.

In addition, police snipers, plainclothes and anti-terror officers will be deployed and parking and transit restrictions will be put in place. The government will close large sections of the city to traffic, Cazeneuve said.

French investigators are still trying to piece together the web of connections between three terror suspects killed Friday and their suspected links to al Qaeda in the Arabian Peninsula and other terrorist groups. They will remain at a heightened security level as the investigations continue, officials have said.

The country continues to cope with three days of terror that left 17 people dead; thousands gathered on the streets for vigils Saturday.

The precautions may help to ease the nerves of a country left on edge by the wave of violence.

The targeting of a kosher grocery store has shaken Jewish communities in particular. Amid the heightened security concerns, the Grande Synagogue of Paris was closed Saturday for the first time since World War II.

Brothers Cherif and Said Kouachi, authors of Wednesday's deadly attack on the office of satirical magazine Charlie Hebdo, were killed Friday after the two violent standoffs. The brothers are suspected of killing 12 people in a massacre at the magazine offices.

Coulibaly, suspected in the slaying of a police officer, was killed by security forces Friday after he shot and killed four hostages during the siege at the kosher market.