Work Begins On Iconic Mural As Part Of Restoration 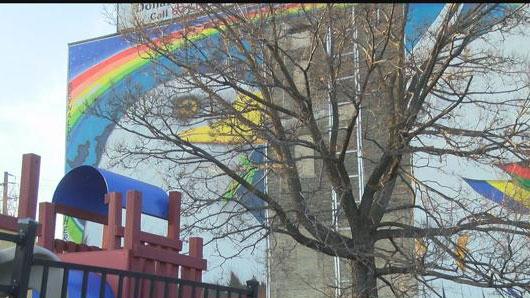 If you have ever taken I-94 into Milwaukee from the south, you have no doubt seen the colorful Mural of Peace as you entered the city,

The building’s south wall is covered by a well-known mural, “Mural of Peace,” by Milwaukee muralist Reynaldo Hernandez.

The building did house Esperanaza Unida. The organization is a non-profit that offered a variety of community services.

But the city foreclosed on it last year and found a new buyer.

Jeff Fleming from Milwaukee City Development said some of the panels will be replaced by windows covered with film.

That requirement was in the Purchase and Sale Agreement: purchase terms and conditions.

The City’s sale agreement will include a requirement that, if the Buyer installs new windows that penetrate the mural, the Buyer must integrate the windows in a manner that is acceptable to the Department of City Development such that the windows substantially blend into, and minimize disturbance of, the existing mural.

According to Fleming, the Buyer is in contact with Mr. Hernandez regarding the status of the mural.