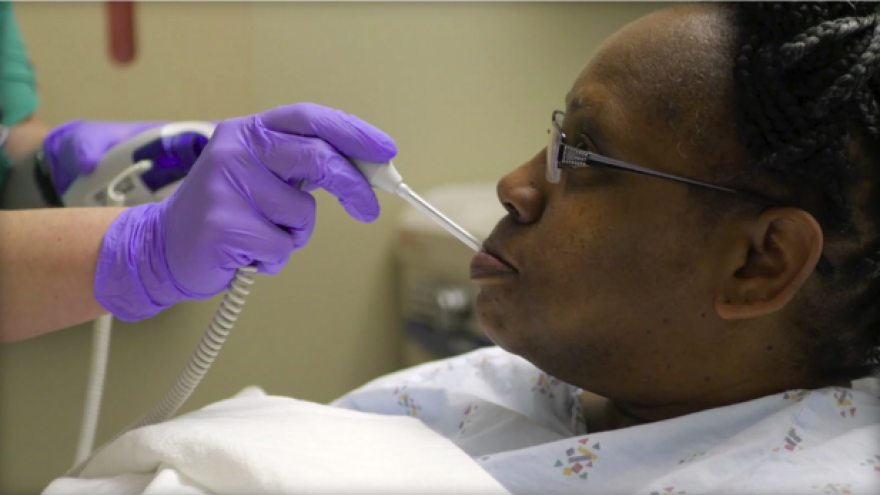 (CBS NEWS) For years, doctors gave Kendra Jackson a list of potential reasons for the cause of her perpetually runny nose: allergies, a cold, seasonal congestion. But her nose was gushing constantly and it was affecting her quality of life. She suffered from headaches and had trouble sleeping.

"One of the things she said that stuck out to me was that she would wake up and her entire shirt would be covered with this drainage from her nose," Carla Schneider, a physician assistant at Nebraska Medicine, told CBS News. "That is not normal. That's not allergies at all."

Schneider finally diagnosed Jackson with something much more unusual: Cerebrospinal Fluid (CSF) Leak, a condition that occurs when CSF, the watery fluid that circulates around the brain, leaks through a hole in the skull bone. The body produces CSF daily, continually replacing it as it is absorbed into the bloodstream. Doctors found that Jackson was leaking about half a liter of CSF a day.

"CSF helps to create a buffer for the brain so if the brain moves it doesn't hit against something hard," Schneider explains. When there is a leak it can leave the patient susceptible to infections like meningitis.

CSF leaks can either occur spontaneously from an unknown cause or as the result of trauma from a head injury, surgery, or a tumor.

Jackson told Schneider that her symptoms began a couple years after a car accident in 2013 when she hit her face hard on the dashboard.

She also experienced most of the drainage from only one side of her nose, another sign of CSF leak.

Tests confirmed Jackson had the condition and she was scheduled for surgery to correct it. Doctors performed the procedure, which involved a graft placed to close the hole in the skull base to wall off the leak, on April 23.

Jackson had a follow-up appointment May 4 and doctors at Nebraska Medicine said she is doing well.

"So far her post-op course is going as well as we could hope," Schneider said.

Schneider said Jackson's case should serve as a reminder to patients to listen to their bodies and to continue to seek help if they know something is wrong.

"Find a doctor that you can have a good relationship with," she said, "and never be afraid to get a second opinion. We won't be offended."