Woman who tricked thousands on Tinder explains purpose behind competition 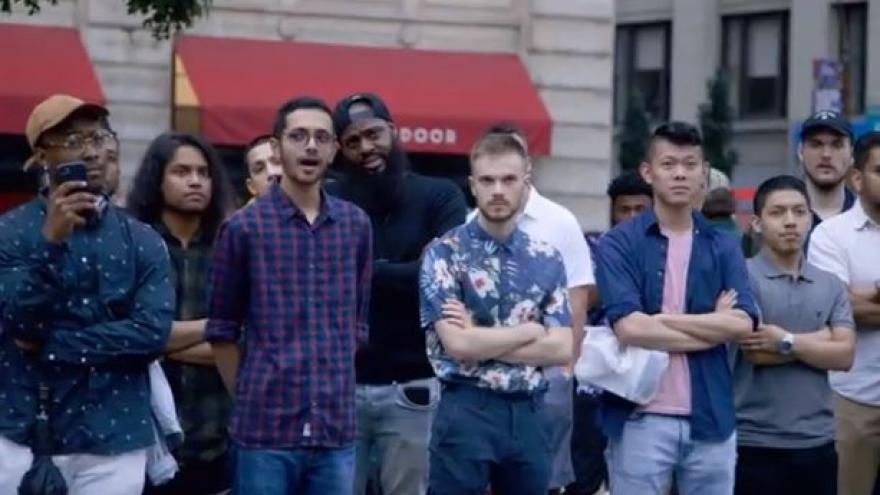 Aponte used the dating app to invite men to meet her in New York City's Union Square last Saturday. When they all got there at the same time, Aponte revealed that they were actually invited to take part in her public dating competition. "Hi everyone. As you may or may not know, my name is Natasha, and I have everyone here today to be on a date with me," Aponte said, stepping onto the stage set up in the the square.

Some men looked shocked. The woman they thought they were meeting for a date had invited all these other men to the same place at the same time.

"Dating apps are very difficult, and I said, 'Maybe I can bring everyone here in person and see how that goes.' So, do you have what it takes to win a date with me?" the woman announced to the crowd. Some men laughed, others hurled profanities and left.

Now, Aponte has revealed she worked with a producer named Rob Bliss to execute the massive dating scheme. Bliss produced a short film explaining how and why the duo planned the ruse. The film, titled "The Tinder Trap," was released on Thursday, and included footage from Aponte's mass date in Union Square.

"There's a lot of issues related to the online dating," Rob Bliss told CBS News. "It's sexist, ableist ... there's a lot of problems." Bliss said his idea was to have someone do in public what a lot of people have been doing on Tinder: judging prospective dates on minuscule things, like physical characteristics.

He says it took him two years to plan it, and Aponte, an actress he hired, joined the project about two months ago.

"I talked to Natasha about the project, my ideas for it, and she had dealt with some similar issues when she had been on a dating app and she wanted to join in," Bliss said. They set Aponte up with a Tinder profile — something she hasn't had for years, she said — and she started swiping right on every guy the app offered her.

"I took this project because it's something I feel is wrong," Aponte told CBS News. "It's sad to see on Tinder or online 'I'm not going to date you because of x, y and z.'"

Bliss knew he would need to message thousands of people on Tinder to get the crowd he wanted. So, he outsourced help. He hired about 50 people to message about 7,500 men, pretending to be Aponte. They invited all of the men to Union Square on Saturday. About 2,300 men said they would show up, and about 1,000 did, Bliss said.

The producer said figuring out a way to outsource the messaging was the hardest part of the project. Getting people to swipe right and connect with Aponte was "simple," he said. "I think guys on Tinder are a dime a dozen, guys that want to meet up or hook up. Getting responses was quite easy."

Of course, when all of those guys realized they had been hoodwinked, some were outraged. The video Bliss produced shows scores of men surrounding the stage in Union Square, then walking away angrily when they realized Natasha had set them up. Bliss said that outrage was exactly what they were hoping for.

"It is outrageous!," Bliss said. "Where have you guys been? Where have we all been? Everything we did was pretty much par for the course of how people have been treating each other on dating apps."

Some of the men invited on the mass date didn't leave. Bliss said hundreds stayed to watch the dating competition and between 50 and 100 men participated in it. Aponte's dating game was superficial — she judged men on physical appearance and ability. Men did pushups, raced each other in a sprinting competition, and stood before Aponte as she judged them in front of the crowd.

"Anyone under 5'10'' please leave," she announced to the group. "No beer bellies, no long beards, no bald guys, no khakis ... also, anyone named Jimmy. I don't enjoy the name Jimmy." Aponte's criteria seemed trivial and at times cruel — but she and Bliss hoped it exemplified how people tend to act on dating apps, often writing people off due to minor physical characteristics.

"Just because someone doesn't check off every box on what we find attractive, doesn't mean they aren't. It's absurd, isn't it? To judge people on such petty things, as if they like to wear khakis. We know that. Look at how angry this makes people. And yet, this is what we've been doing the whole time," Aponte says at the end of the short film. Nearly 2,000 people viewed the film on YouTube within hours after it was posted on Thursday.

Aponte was prepared for the social experiment to gain widespread attention. It went viral after one of the men who was duped into showing up to Union Square tweeted about the ordeal on Sunday. "I am about to tell you an epic tale about subterfuge, dating in the 21st century and the fall of human civilization. This actually happened to me and it could happen to you too," he wrote.

I am about to tell you an epic tale about subterfuge, dating in the 21st century and the fall of human civilization. This actually happened to me and it could happen to you too. Get some popcorn. *Thread*

Aponte said, "On social media, I've gotten way more positive than negative [responses], but of course the negative tends to stick harder … I'm also agreeing with the people who think this is wrong. It is wrong to judge someone in person, so why do we think its socially acceptable online?"

Aponte says the men outraged by the Tinder trick exemplified "how men are so quick to just judge [women] and put a label on us just because we didn't give them what they wanted ... it's just a bruise to their ego," she said.

In the end of "The Tinder Trap," Aponte did pick a man from the group of competitors who stuck around. "I genuinely liked the person, I thought he was so sweet," she said. She did not divulge if she and the man planned on seeing each other again, but said that Tinder has offered her a lifetime gold membership just in case she needs it.

"I think it was kind of a tongue-in-cheek kind of joke," Bliss said about Tinder's offer, which Aponte said she is going to decline.

Aponte said the Tinder story shows how "that whole platform is just not very healthy at this point, but I hope [the film] opens awareness."