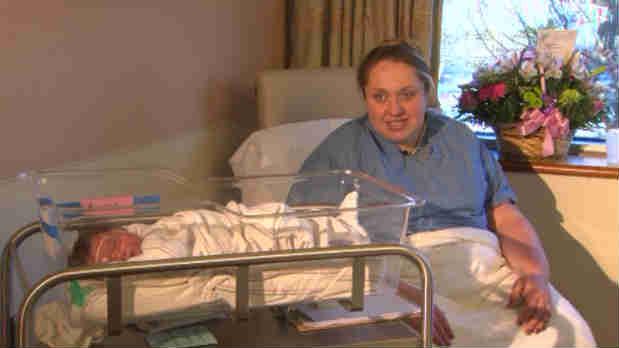 It was the surprise delivery of a lifetime.

Katie Kropas of Weymouth, Massachusetts, gave birth to a healthy baby girl this week, and she didn't know she was pregnant until she went into labor.

\"Tuesday morning I woke up and I had crazy lower back pain,\" she told CBS Boston. Kropas rushed to South Shore Hospital and was shocked to hear the diagnosis.

The new mom was shocked because she says she didn't feel the typical signs of pregnancy.

\"I thought I had put on some Christmas season weight, but I never thought I was pregnant. Never,\" she says.

It's called a \"cryptic\" pregnancy, and it happens often enough to be the subject of a popular TV show called \"I Didn't Know I Was Pregnant.\"

Dr. Kim Dever, the chair of Obstetrics and Gynecology at South Shore Hospital, told CBS Boston it's not the only time the hospital has seen a case like this.

It tends to happen when a woman is overweight or has irregular periods, and she may not feel much baby movement because of where the placenta is positioned, the doctor said.

\"Very often, especially in your first pregnancy, you're really not aware of what you're feeling and we often have women joke and say they're feeling gas pains or they can attribute it to other natural conditions,\" Dever said.

Katie's mother says she didn't realize a baby was on the way either.

\"I couldn't believe it. I couldn't get my head around it, and I live with her. As a female, there were no signs,\" said Karen Kropas.

How often does it happen? A British study found that one in 2,500 pregnancies is a surprise until labor begins.

Katie Kropas said that despite the major surprise, she is excited to spend time with her new bundle of joy.

\"It's going to be a hard couple of first weeks, especially since I didn't have a lot of time to prepare but, I love her,\" says Katie.