Woman takes off shoes, gives them to barefoot homeless woman 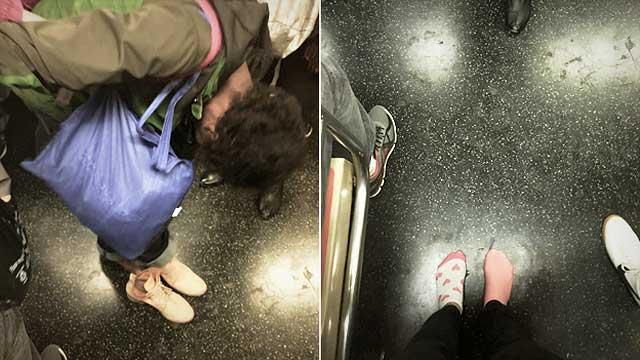 (CBS NEWS) All it took was two shoes and a pair of laces to turn a stranger's day around.

Kay Brown was on her way home from work when she saw a homeless woman enter her New York City subway car; she was barefoot -- no socks, shoes or anything.

As the woman walked by, Brown stopped her and asked what shoe size she wore. She responded, "Size 7" -- the same size as Brown.

Without a second thought, Brown took off her tan suede boots and handed them to the speechless woman. They fit perfectly.

"She was so kind and she started crying, put them on her feet and then quietly walked away," Brown told CBS News. "She was beyond thankful."

With nearly 60,000 homeless people living in the city, according to the Coalition for the Homeless, a person in need is not an unusual sight. But Brown's kind gesture was.

"I want people to put themselves in someone else's shoes (no pun intended)," she said. "You never know if/when that could be you on the subway barefoot and in need of compassion."

At first, people stared at Brown in shock. When subway riders realized what she was doing, they started to chime in.

"People didn't say anything at first," she said. "It wasn't until this kind woman next to me asked to take a selfie -- without knowing my name -- and told me how beautiful she thought the gesture was."

A man sitting across the aisle took a pair of thick socks out of his gym bag and offered them to Brown.

After standing in her mismatched socks for 15 minutes on the subway, she finally reached her stop -- and began her six-block journey home.

Despite the strange looks and comments, Brown -- who has been on the board of a non profit charity called Fly for MS for years -- was satisfied.

"Now she's able to wear a pair of shoes each day and suffer a little less," Brown said, reiterating that it's the middle of November and the woman had no place to go.

"The least I could do is give her a pair of shoes," she said.