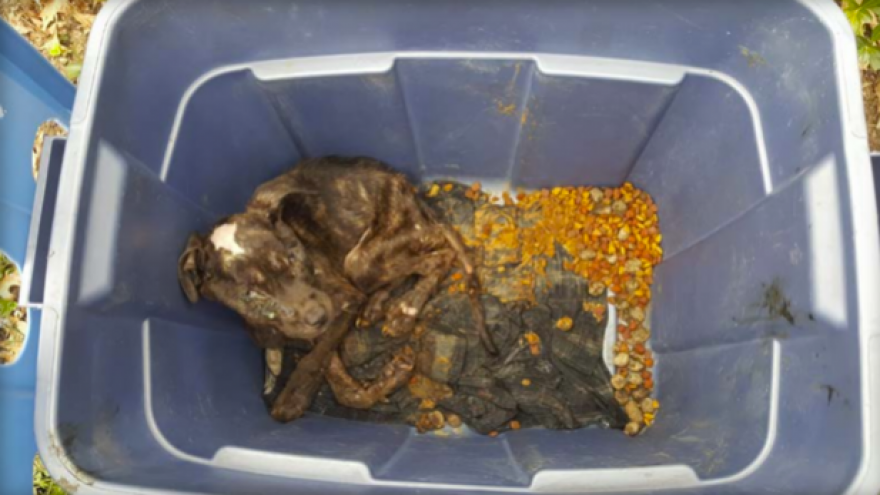 (CBS) An extremely malnourished 10-week-old puppy was discarded in a plastic storage container over the weekend in Columbia, Maryland, and now police are searching for the person responsible.

Local resident Jill Eberhart called 911 Saturday afternoon to report that a dog was “left for dead” inside a container in a grassy area on the side of a road. Erbhart says the plastic container was covered in holes, allowing the dog to have some access to air, but he was left without food or water.

“What’s it take to give an animal some water? We don’t live in a war zone here,” she told CBS Baltimore.

“I’ve been here 44 years, I haven’t seen anything like that,” another neighbor told the station on Monday.

Eberhart and her son waited with the small pup, who was unable to stand, and gave it the water it so “desperately needed,” possibly saving his life.

An officer from Howard County Animal Control responded to the call, and rushed the dog to an emergency clinic, where he received a full examination.

“Veterinarians at the clinic reported that the dog, which appears to be a 10-week-old brindle pit bull, was extremely malnourished, had open wounds and missing fur, and was covered in urine and feces,” Howard County police said in a statement.

Animal Control officers administered medical care and say the puppy, who has been nicknamed “Eddy,” has been responding well to treatment. They believe the dog will make a full recovery and are hopeful he will soon be placed in a new home.

The shelter has already received requests to adopt the dog once he completes his recovery, Howard County police spokesman Sherry Llewellyn said.

Meanwhile, investigators at the police department say they are seeking the public’s help for information on the person who tossed the pup in the plastic box.

Anyone with information is urged to call Animal Control at 410-313-2780 or email animalcontrol@howardcountymd.gov.