Woman Runs Over Boyfriend After Finding Out he is HIV-Positive 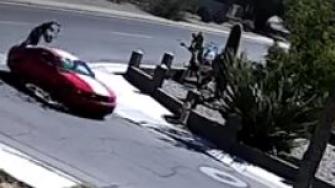 PHOENIX (WTVR)— This video shows a man on a bicycle in the Phoenix area being run down by a woman in a Ford Mustang.

The incident, which took place at 13th Place and Hatcher on April 29th, was captured on surveillance video.

Bicyclist run over by a car

It shows the Mustang slamming into the cyclist and sending him airborne over the vehicle and onto the pavement. The driver doesn’t stop, leaving the man in the street. Eventually he gets up and stumbles around. He lived but was injured.

According to KPNX, the woman — Misty Lee Wilke — was the man’s girlfriend, and she just found out he is HIV-positive.

BlueHorse Solutions LLC, confirmed that it installed the cameras on the house that captured the footage about a week before the incident in late April.

A Maricopa County grand jury indicted Wilke on charges including: attempting to commit second-degree murder, leaving the scene and aggravated assault with a deadly weapon.

Wilke is pleading not guilty.