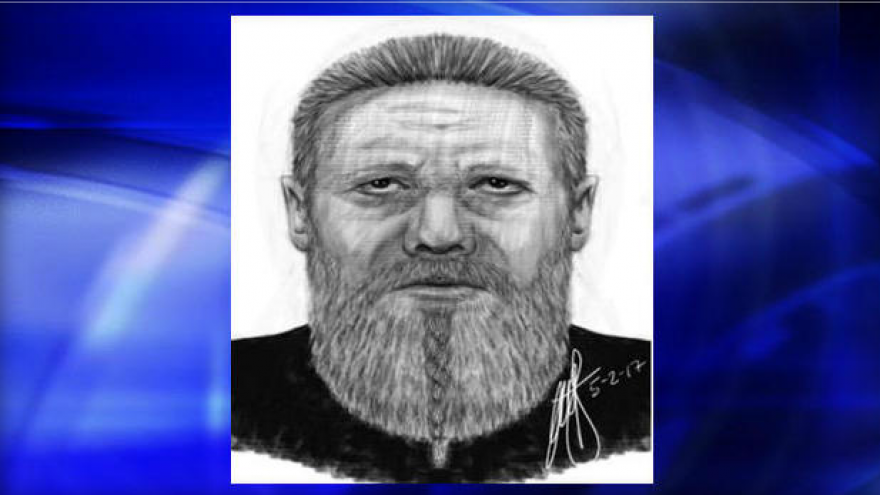 BALTIMORE -- (CBS NEWS) Police are asking for the public's help as they search for suspects accused of raping a woman at a Baltimore cemetery, reports CBS Baltimore.

Police say the crime happened April 30 at the Voshell Memorial Gardens Cemetery. The woman told police she was there visiting a relative's grave when three men approached her.

She said the men pulled out a gun and raped her, before stealing her cell phone and money and fleeing, police tell the station.

Police said the victim was able to give detailed descriptions of her attackers. Investigators released a sketch of one of the suspects, who was described as a white male who looked to be in his 50s, standing five feet, seven inches tall and weighing around 200 pounds. His skin tone is described as very pale. He was wearing dark, Dockers-style pants and sandals, and had long gray hair he wore in a ponytail. He also had a long gray beard, braided in the middle.

"That's not normal, not a lot of people have that braid down the center of their beard, so we feel like he's going to stick out," Baltimore police Det. Donny Moses told WBAL.

Another suspect was described as a white male, around five feet, nine or five feet, ten inches tall and 160-170 pounds, in his late 20s. This suspect had short dark brown hair, wore a gauge in his left ear, and was wearing tan shorts and a dark polo shirt.

The third suspect is described as a bi-racial male, about five feet, nine inches tall and 250 pounds, in his 30s with dark, wavy hair. This suspect was wearing flips flops, tan shorts, and a polo shirt with a college logo on the front.

"We need to find these suspects," Moses said.