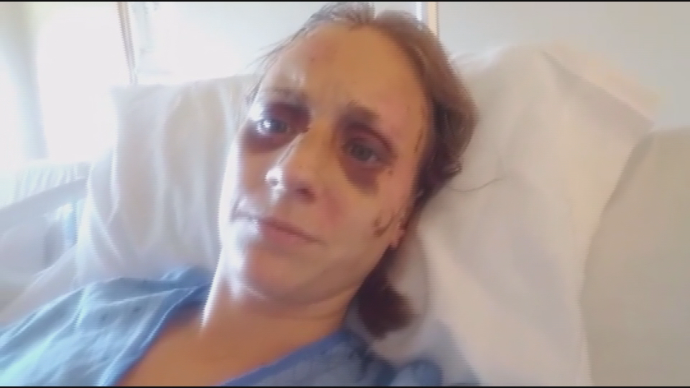 UTAH (WSAW) -- After a 100-foot fall off a cliff in Arizona, a Minnesota nurse with ties to central Wisconsin said Thursday, she's thankful to be alive.

It was from that mountain that Amber Kohnhorst, 25, said she watched her life flash before her eyes.

Staying at an Arizona ranch for a volunteer trip in Utah, she spent most of her day hiking to the top of a free-climb mountain by herself. It was by chance the owners of the ranch were alerted to her plans.

"My plan was just to go an hour up this mountain in the backyard and then an hour back down... I realized, 'oh my God. I don't know how to get down. I'm stuck on the top of this mountain,'" Amber Kohnhorst said.

After hours without food, water, or cellphone service, she believes she lost consciousness.

"When it was dark out, I woke up at the bottom of this canyon," she said.

The bottom of which she would later learn was a 100-foot drop.

"I could barely move... Every time I moved, I screamed because of the pain," she described.

She was immobilized by what doctors eventually identified as a ruptured tailbone.

"All I remember was being scared to death. I didn't know if anybody was coming for me," she said.

Over the next nearly 28 hours, Amber managed to make her way partially back up the mountain.

"I got the strength to crawl back up the mountain that I fell down, so I crawled at least 50 feet back up it," she explained.

That's where she wrote what she thought would be her last goodbyes to her parents, only some of which she could remember. She even apologized to her parents for hiking alone, like they had told her not to.

"I took some wipes I had and cleaned my face and I tried to make myself look as good as I could, and then I took pictures for my parents and said my possible goodbyes... I wrote 'I'm sorry' and I could read that I wrote 'I'm trying to whistle," she recalled.

"I was texting her and texting her, and she wasn't texting me back," said Amber's mother, Nannette Kohnhorst.

Amber's parents were notified that their daughter was missing hours into rescuers' search for her.

"To hear your daughter is lost in the mountains is pretty rough," Nannette said through tears.

"I was like, 'Amber, there's a helicopter out there. This is your one chance to survive," Amber said of the moment she heard the rescue efforts. "...You stand up. You make as much noise as you can because if they find you, you're gonna live.'"

She was eventually lifted by the helicopter and transported to a Utah hospital, and is now well on her way to recovery. Now, the family is just trying to bring her home.

"I'm praying and we are trying our hardest to get me back home," Amber said.

"There's a lot of good people in this world. Just meeting people who have saved her. Man, we gotta take more time for family," Nannette said.

The family has set up a Go Fund Me account to help bring Amber home. Click here to