Woman climbs into Madison zoo exhibit and is licked, kicked by giraffe 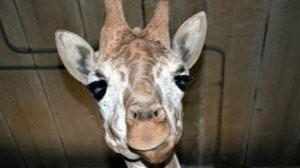 MADISON-- A California woman who was visiting the Henry Vilas Zoo in Madison has been cited after climbing into the giraffe exhibit.

Madison Police said that around 5:30 p.m. Saturday 24-year-old Amanda Hall of San Luis Obispo, CA climbed over one fence and was partially through a second fence that surrounds the giraffe exhibit.

That's when two-year-old and 12-foot-tall giraffe named Wally first licked Hall's face and then turned and kicked her in the face.

Hall was cited for Harassment of Zoo animals, which carries a $686 fine.

She told police officers that she climbed into the exhibit because she loves giraffes.