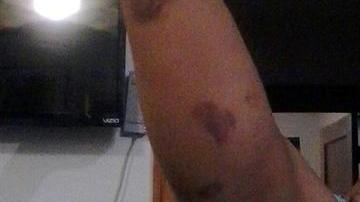 Butler -- A woman claims she was assaulted by security guards at a local skating rink.

\"Bruises on my arms, really bad blood clots on both arms, my wrist was severely bruised, my leg, my walking was messed up for a few days, then I had to get an MRI on my neck from being choked so hard,\" claims Gloria Baxter of Milwaukee.

Butler Police confirm they responded to an incident at Butler Skateland on January 19th but they have not released the report.  We're told the chief is out of town at a conference and will release more when he gets back on Saturday.

Baxter said the incident began when she exchanged words with a woman at the skating rink and later security told her to leave.

\"The manager told them I didn't have to go anywhere,\" she claimed.  \"Immediately following that one of the guards grabbed my arm to remove me and I snatched away from him and told him don't touch me when I did that all three of the male security guards jumped on me.\"

She said since she posted her ordeal on Facebook more people have come forward claiming security at Skateland have been disrespectful to minority patrons.

Baxter recieved a more than $1300 municipal citaion for disorderly conduct.

Community activists are calling for a boycott of the establishment.  A meeting about that will be held on Saturday at 5pm at Gene's Lanes and Lounge near 63rd and Fond Du Lac in Milwaukee.