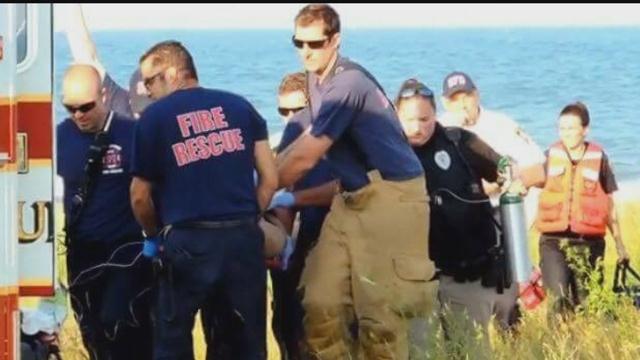 People in Sheboygan are talking about a near tragedy on Monday night when a 14-year old boy was saved after almost drowning in Lake Michigan.

The waves were much higher than 3 feet yesterday.

And those swimming yesterday reported struggling in an undertow.

Witnesses believe the 14-year-old boy was caught in an undertow too.

Police said the boy struggled as he got deeper into the water.

And he is now in critical condition.

These are pictures a neighbor took of the rescue at king park. The boy was out swimming yesterday with his family and they called 911 when he didn't resurface.

Rescuers found him in 5 feet of water performed CPR and flew him to Children's Hospital.

Mark Pullman lives 100 feet from where thy pulled the boy out.

"We've been living here for about four and a half years, and there's never been an incident on this beach or over at King Park where somebody had to be pulled out of the water. So, this is totally new to this area right here, but everybody who goes in the water knows the dangers. Especially when the waves were that high yesterday, you never know. You can't see an undertow; so you have to be very careful,” said Pullman.

There is no lifeguard on duty at this beach.

Parents here today say they're keeping a close on not only on their kids, but other children swimming after hearing what happened.