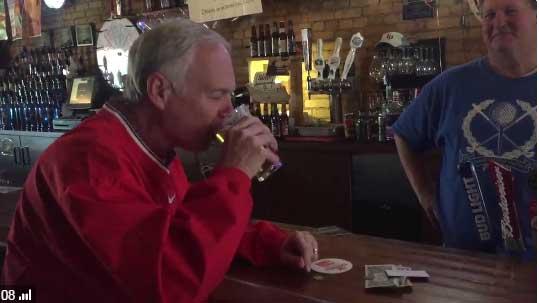 Now Republican U.S. Sen. Ron Johnson is slamming a beer to get votes.

Johnson's campaign posted a video on Twitter Thursday showing him sitting at a bar pounding a beer in about 9 seconds. The bartender walks away impressed, saying "That's pretty good."

What you do when the Tavern League of Wisconsin endorses you: pic.twitter.com/wTo8q5BbVg

The video was shot to celebrate Johnson's endorsement by the Tavern League of Wisconsin, the influential lobbying arm for bars. The group endorsed Johnson's challenger Democratic former Sen. Russ Feingold in 2010.

As for what beer he pounded, Johnson spokesman Brian Reisinger says "of course" it was a Miller Lite.

Johnson also has a television ad showing him changing his grandson's diaper, dodging a stream of urine in the process. The message was he cleans up messes at home and in Washington.