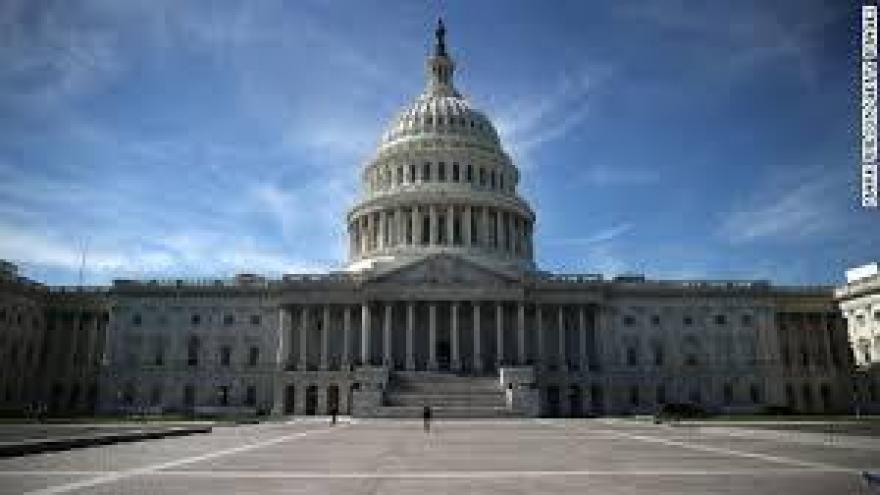 The Senate voted 51-48 along party lines for the measure, which relies on the same budget process used seven years ago to approve the landmark healthcare law to now attempt to dismantle it.

"This resolution will set the stage for true legislative relief from Obamacare that Americans have long demanded while ensuring a stable transition," Senate Budget Chairman Mike Enzi of Wyoming said, just after 1 a.m. "The Obamacare bridge is collapsing and we're sending in a rescue team."

Kentucky Sen. Rand Paul, one of the most vocal GOP opponents of voting on a repeal bill before coming up with a replacement package, voted against the budget resolution and California Sen. Dianne Feinstein was absent.

Senators were bleary-eyed as they walked quickly to the exits, wrapping up the final vote a little before 1:30 a.m.

Vermont Sen. Bernie Sanders, the top Democrat who led the late-night fight against a repeal, said the protest could be a sign of things to come as the fight stretches on.

"I think it's important for this country to know this was not a usual thing, this is a day which lays the groundwork for 30 million people to be thrown off their health insurance," Sanders said. "And if that happens, many of these people will die.""We wanted to say no matter how late, we're going to stay and fight and represent our constituents -- there are so many constituencies who will be hurt by this repeal without a replace," said New York Sen. Chuck Schumer.

Democratic senators registered a somewhat subtle, but significant protest in the Senate as they cast their votes -- declaring why they were voting against the repeal, a rare move that rankled Republicans in the chamber.The House is expected take a swift vote on the resolution, possibly as early as Friday, which will trigger congressional committees to begin crafting a second bill that would roll back major parts of Obamacare. Though it will be weeks before Congress votes on that bill, Thursday still marked a victory for the Republican Party as it moves toward overhauling the country's healthcare system.Before Thursday's vote, a political spectacle known as "vote-a-rama" unfolded on the Senate floor.

The largely symbolic exercise -- which began Wednesday evening and stretched into wee hours of Thursday -- was ripe for theater. However, the tone was largely subdued, missing some of the fire of voting marathons in previous years.

Democrats still used the late-night drill to publicly defend the Affordable Care Act and chastise their colleagues across the aisle for starting the process of overhauling a law that gives health insurance to some 20 million Americans. Republicans, meanwhile, stressed the harmful impact of the law and the urgent need to do away with it.

Senators introduced more than 160 amendments to the budget resolution, which led to a marathon session of impassioned speeches and roll call votes. Although these votes were non-binding and the budget resolution doesn't require the president's signature, the process helped crystallize the Democratic Party's top priorities as it looks to defend the major pillars of Obamacare.

The most important amendments for Democrats were aimed at preserving what they argue are popular provisions of Obamacare.

Democratic Sen. Tammy Baldwin of Wisconsin pressed a measure to allow young adults to stay on their parents insurance until age 26. "It will block Republican efforts that would weaken dependent coverage," Baldwin said in a brief but forceful floor speech before the vote.

But Republicans -- many of whom have expressed interest in maintaining the provision when they eventually replace Obamacare -- nevertheless blocked the Baldwin amendment, arguing it wasn't applicable to the underlying budget resolution.

Democrats also sought to protect measures dealing with pre-existing conditions and reproductive healthcare services for women.At times, the evening also showed that Republicans and Democrats share some common goals -- even if the two political parties are bitterly divided on the merits of Obamacare.

Earlier in the night, West Virginia Sen. Joe Machin, a moderate Democrat who has called on Republicans to work in a bipartisan fashion on repealing and replacing Obamacare, emphasized the importance of preserving coverage for patients in rural areas.

No matter what happens to Obamacare, Manchin said: "We are going to make sure that we protect our rural hospitals and rural clinics."

But on the same topic, Republican Sen. John Barrasso of Wyoming argued that it was because of Obamacare that rural hospitals have shuttered."For people in small towns -- the closures that we've already experienced, these closures have had a devastating impact," Barrasso said.

President-elect Donald Trump has ratcheted up the pressure this week, calling on his party to act as quickly as possible. Perhaps more significantly, Trump is adamant that Republicans vote on repealing and replacing Obamacare more or less at the same time. This is a significant divergence from the party's initial thinking that it would first vote on repeal before considering replacement options.In a news conference in Wednesday, Trump told reporters that a plan will be unveiled soon after his nominee for Health and Human Services secretary, Tom Price, is confirmed. A Georgia congressman, Price is an ardent Obamacare critic and has previously introduced detailed legislation to repeal and replace the law."We're going to be submitting -- as soon as our secretary's approved, almost simultaneously, shortly thereafter, a plan. It'll be repeal and replace. It will be essentially simultaneously," Trump said. "Probably the same day, could be the same hour."

Trump appeared to be suggesting that the plan would come from his administration, but a transition spokesman told CNN that he couldn't confirm whether that was Trump's intention.

Even as Republicans advanced the plan to roll back Obamacare, plans to replace were still being formulated. To that end, a small group of relatively moderate Republican senators -- including Tennessee Sen. Bob Corker and Alaska Sen. Lisa Murkowski -- initially pushed a change that would give senators until March to develop a plan to replace Obamacare. But the senators dropped that push as it became clear Wednesday that Republican leaders were moving toward replacing Obamacare as they repeal it.Vice President-elect Mike Pence met with senators at the Capitol Wednesday. As he exited his meeting with Pence, Manchin said that the incoming VP promised a draft replacement for Obamacare would be available in 30-60 days.

Republicans on the Hill do not yet have a plan for replacing Obamacare, and are considering a series of possible legislative paths to replace what they vote to repeal.

It's also not clear that one comprehensive "replacement" bill will ultimately emerge from GOP lawmakers -- in fact, senior leaders are currently weighing the option of incremental replacement bills.

For example, they are exploring whether replacement measures could be inserted into the "repeal" reconciliation bill, which Republicans hope to vote on by late February or March. Leaders are also looking into whether any replacement or healthcare reform measures could be inserted into reauthorization bills that Congress is expected to take up later this year.