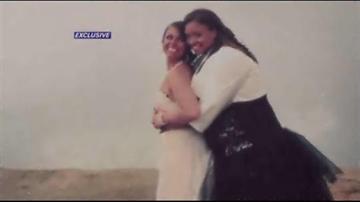 MILWAUKEE-- Their marriage is not recognized in Wisconsin, but Katherine Halopka-Ivery and her wife Linda could be one step closer toward gaining federal benefits.

\"It's definitely a huge step forward when you're looking at the federal side of the law,\" said Katherine, \"and hopefully-- on the state side, those benefits will be coming our way sooner rather than later.\"

Sen. Baldwin said in a statement--\"The SAME Act will provide fairness and equality for same-sex couples and help fully realize the Supreme Court's historic ruling last summer that was built on our founding belief that all americans are created free and equal under the law.\"

\"That's exactly what it's supposed to mean, for all,\" said Colleen Carpenter, Executive Director of Milwaukee's LGBT Community Center, \"not just the people I like, or the people I agree with.\"

Since the nation's high court struck down the Defense of Marriage Act (DOMA)-- federal benefits have been on hold for same-sex couples living in states with constitutional bans like Wisconsin.

\"When we went to get married, it wasn't even a thought in our head,\" said Katherine, \"all these different fights and struggles we'd really have to go through.\"

Regardless of what happens in their fight for marriage equality, Katherine says for her and Linda-- Wisconsin is where they will stay.

\"We are just going to hope and pray that our state, along with the rest of the nation, is going to say that-- 'that would be silly, for us to have to pack up our entire life, our careers, move away from our families, just for us to get the same rights as any other couple,'\" said Katherine.

The ACLU has challenged Wisconsin's constitutional ban on same-sex marriage.  Opening arguments are slated to begin in August.  The SAME Act is currently sitting in the Senate Finance Committee.