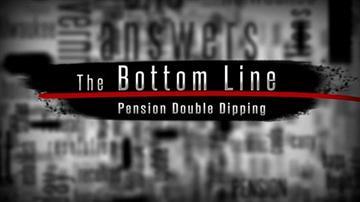 MADISON -- A Wisconsin legislative audit shows thousands of state employees are retiring, and getting rehired by their former employer a few months later. This is what many call double dipping, collecting a pension while also collecting a paycheck from the government..

Rae Ann McNeilly, Executive Director of Taxpayers United of America (TUA), says government workers are doing this because they can practically double their income while in their 50s.

\"We've been taxed to death so these people can live high on the hog,\" complains TUA President Jim Tobin.

Pension systems in some states prohibit the practice, but Wisconsin isn't one of those states.

When workers are eligible to retire -- often at the age of 55 -- they leave their job and begin collecting a monthly pension check for life. But after 30 days they can be rehired -- for the same job at the same pay, and it's all perfectly legal.

The state report said government agencies rehire pension-collecting workers because they have the skills and experience needed for the job.

The audit says most of the rehired employees only worked part-time for less than a year while also collecting a pension, but some stayed on the job -- cashing both checks -- for years and years.

Some blame the unions for the practice, but Wisconsin Professional Police Association Executive Director Jim Palmer says he agrees that returning to the same job after retirement sounds ridiculous.

\"It's not something we see in a law enforcement setting,\" said Palmer.

He says many officers do go back to work part-time for the government after retiring, often at a technical college or smaller agency where salaries are considerably lower.

Palmer says many officers can only afford to take those jobs because they are collecting a pension check in addition to a part-time paycheck.

\"If they can hire an officer who is retired and has a wealth of experience, that's of great benefit to a local municipality,\" Palmer noted.

Rep. Duey Stroebel (R-Saukville) said in an email that the latest state budget for 2013-2015 included provisions he suggested to curb double dipping, by cutting off state pension checks to anyone who goes back to work more than 26 hours per week at a government agency.

But Rep. Stroebel acknowledged that a recent state audit showed 7,856 past retirees continue to collect a full-time paycheck and a pension check from the state because they were grandfathered in before the change. He said that number does not include part-time workers, people who had been double dipping prior to January 2005, and people who returned as independent contractors.

Auditors say state agencies paid $1.7 million for goods and services provided by 266 pension-collecting retirees from 2007 to 2012.

Rep. Stroebel refused to discuss the issue on camera, and so did 50 other legislators -- both Democrats and Republicans -- contacted by CBS 58 about double dipping, though one scheduled an interview that he later canceled.

Sen. Glenn Grothman (R-West Bend) told us by phone the double dipping controversy had already been hashed out and both parties had reached a compromise, so lawmakers didn't want to talk about it anymore.

\"Nobody is working on that issue. The compromise wiped that issue from the table. Nobody is looking to take it any further,\" he insisted, a sentiment echoed by others approached for an interview.

The bottom line is there appears to be no political will in Wisconsin to eliminate double dipping altogether.

But Tobin's TUA group isn't satisfied with that.

\"It's done in the politicians' minds, but not in the minds of the taxpayers,\" he added. \"Much more has to be done. Wisconsin pension liabilities are growing much faster than the ability of taxpayers to pay them.\"

Palmer refutes that, and says Wisconsin has a fully funded pension system this is \"one of the healthiest in the country.\"

The Department of Employee Trust Funds says the state paid out a total of $4.2 billion in pension benefits in 2012, an amount that's been increasing since 2008 when the total was $3.8 billion.

TUA says the exact cost of double dipping is unknown, because Wisconsin won't release the amount collected by each individual government retiree -- information released in 33 other states.

\"Stop hiding the pensions behind these secrecy laws. The taxpayers have a right to see what each person is drawing in a pension,\" added McNeilly.

TUA puts together its own estimates of future pension payments for the highest paid state employees based on their publicly-available current government salary.

You can see those estimates at this link: