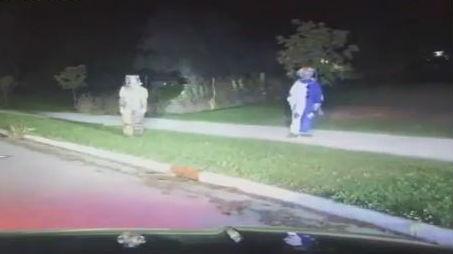 Police responded to a report of people wearing clown masks and chasing after vehicles near Appleton Road and Midway Road early on Friday.

Officers found two men, 20-years-old and 29-years-old, who were involved in the incident. They also found a 26-year-old woman who had been driving the two men around.

After an investigation, police say that the 29-year-old man and the woman left their four-year-old child at home for a minimum of a few hours while they were out clowning around.

The child was placed by the Department of Human Services, and the parents were referred on child neglect charges. The woman was also held in the Winnebago County Jail on a probation hold.

The 20-year-old man was not charged in the incident.

Jennifer Conery, 24, was charged with disorderly conduct and resisting/obstructing an officer.

They both will make their initial appearance on November 1.