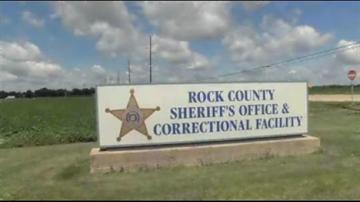 JANESVILLE -- In a program that organizers say is the first of its kind, Rock County jail inmates will train dogs for adoption.

Since Monday, a dog named Duke has been paired up with an inmate named Ryan at the Rock County Jail.

Ryan is in a program designed to give people one last chance before prison by addressing the core issues that lead them to commit crimes.

\"This whole program has provided me a very big opportunity to have a positive impact not just on the dog, but on a lot of people's lives.\" he said.

Duke and Ryan are just the first dog and inmate pair.

Duke will live inside the jail, and be around about thirty inmates daily. Which Ryan says will boost morale inside the unit.

The Humane Society of Southern Wisconsin plans on sending more dogs for training.

These are animals the society's director says aren't dangerous, but at this point can't be put up for adoption.

\"They might have some resource guarding issues, something along those lines. But they'll be issues we feel are correctable.\" said Brett Frazier, the organization’s director.

All that may be needed is time and attention.

Once Ryan helps break duke of some of his bad habits, people interested in adopting him will visit the Rock County Jail.

\"If they approve, or if they feel Duke is a good fit and a good match, then they'll be able to adopt Duke right from here and take him home.\" said Rock County Sheriff Robert Spoden.

Ryan says in just two days together, he can tell Duke will make a difference for him.

\"Duke might teach me more tricks than I teach him. So it's a learning process for the both of us.\" Ryan said.

The jail staff says they are very selective about the inmates they choose to train the dogs.

Sheriff Spoden say he wants to keep building this program, and expand it to female inmates.

He says he also expects to get calls from other sheriffs around the state who may be interested in creating a similar program in their jails.