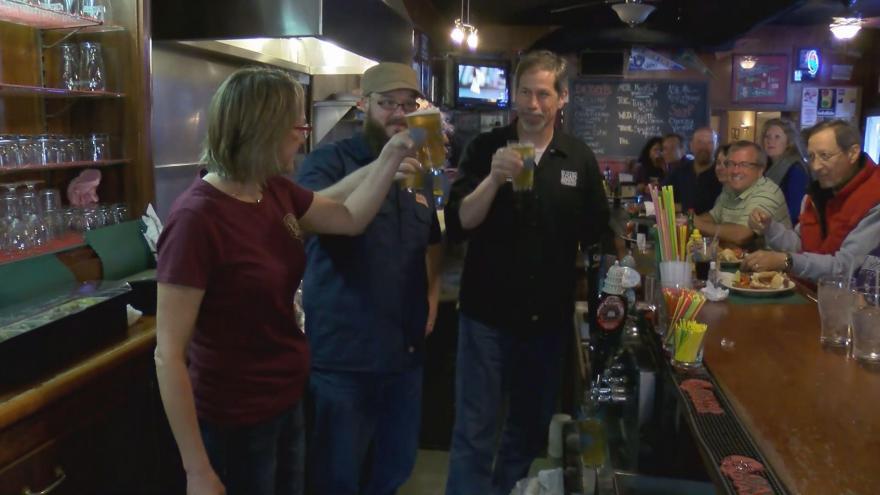 (AP) — Wisconsin's craft brewers and wineries are banding together to head off a plan they fear could force them out of business by prohibiting them from selling their beer and wine where it is made.

No bill has yet been introduced, but a proposal in a memo obtained by a conservative group could force brewers and wineries to work with distributors to sell their products instead of selling directly with customers. Opponents say the Wisconsin Tavern League and alcohol distributors are pushing the plan and fear it could be slipped into the state budget at the last minute.

Tavern league lobbyists say they're not aware of any specific proposal but bars need a level playing field to compete with craft breweries and wineries that are becoming tourism spots. Craft brewers counter that the regulations would hurt business and bars shouldn't turn to the government for help dealing with competition. They've joined state wineries in an attempt to kill the plan.

"They see us as a threat because our parking lots are full and theirs aren't," said William Glass, president of the Wisconsin Brewers Guild and Eau Claire brewery the Brewing Projekt. "Our industry is manufacturing, it's tourism, it's hospitality. They're fearful."

Wisconsin has always been known for its bars. But the picture has been shifting over the last decade as high-profile craft brewers such as New Glarus and Ale Asylum have gained fans. The number of craft breweries has grown from about 75 in 2011 to about 140 last year, according to the Brewers Association, a national craft brewing advocacy group.

It's unclear who is pushing the proposal. The Wisconsin chapter of Americans for Prosperity, a national group backed by the conservative billionaire Koch brothers, obtained a memo laying out the plan's framework with the acronyms for the tavern league, the Wisconsin Beer Distributors Association and the Wisconsin Wine and Spirit Institute, which represents wine distributors, on top of the first page. AFP's state director, Eric Bott, declined to say who leaked it.

According to the memo, alcohol producers would be prohibited from having any ownership in a distribution or retail operation. A new Office of Alcohol Beverages Enforcement would take over alcohol regulation from the state Department of Revenue. The office's duties would include ensuring producers don't distribute or sell on their own.

The changes would mean the end of brewery tap rooms, rooms where brewery visitors can purchase beer. Wineries would no longer be able to sell to on-site visitors. Instead, they'd have to work through distributors to get their product to market, said Alwyn Fitzgerald, president of the Wisconsin Winery Association and owner of Fisher King Winery in Verona.

He called the changes the "death knell" for both industries. Distributors already have plenty of business and even if they were to pick up an obscure label their charges would be exorbitant, he said.

Tavern league lobbyist Scott Stenger said the league had nothing to do with the memo. He declined further comment since no formal bill or even a draft has emerged, saying it's dangerous to debate something outside the Legislature's public sphere. Still, he added that his members can't compete with craft breweries that are growing into destinations for events.

Eric Jensen, executive director of the distributors association, said in an email that allowing craft breweries to distribute and sell their products directly helps them grow, which often results in distribution deals later.

"We have no interest in banning those activities, and doing so would likely harm our own growth opportunities," Jensen said.

Even though no bill has been introduced, Glass fears the budget committee could tack the changes onto the budget just before it's passed using what's known as a 999 motion. The motion contains the committee's final revisions to the spending plan before it goes to the full Legislature. It's traditionally introduced and approved with little debate, often late at night, and has served as a repository for contentious policy moves. The motion for the last budget, for example, would have gutted the state's open records law. That language was later struck amid public outrage.

The winery association, the brewers guild and the Wisconsin Distillers Guild announced last week they've formed a coalition to pressure lawmakers to maintain the status quo. AFP-Wisconsin has launched a media campaign criticizing the proposal, too. Bott said the proposal is too strict and shouldn't be slipped into the budget without scrutiny.