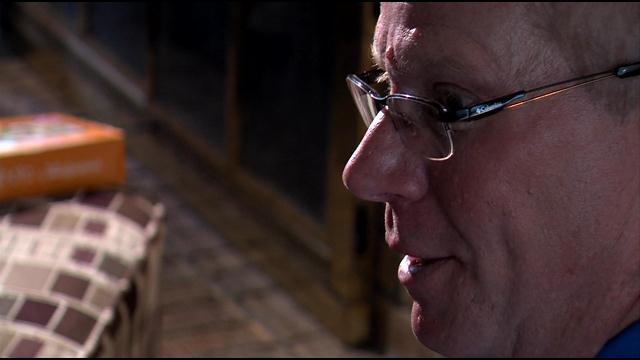 From the couch in his Fond du Lac home, Andy Land relives his dream to climb Mt. Everest.

\"I knew I was going to have a life changing experience but not this one,\" he said.

It's a dangerous feat he set out to accomplish, to raise awareness about hospice care in Wisconsin.

\"I'll think about the patients and their families a lot,\" added Land, a hospice nurse.

They are people he drew strength from to start his trek to the summit in the early morning hours of April 25 in Nepal. It took six hours to cross the ice falls, gaping crevasses of ice.

While resting in his tent at camp one, Land and his team felt the earth shake. Seconds later, he said avalanches came crashing down from everywhere.

\"That was the single, scariest moment for me because what you're doing is, you're sitting in your tent waiting to find out if you're going to die,\" he said.

The leading edge of the snow and strong wind knocked down his tent. But where he once was, base camp, dozens of people were killed and hundreds of others seriously hurt. He witnessed the destruction for himself two days later after being rescued by a helicopter.

\"Boulders the size of vehicles that were blown over 1,000 feet into the glacier, hundreds of them,\" Land described. \"I've never seen anything like that.\"

It was that moment Land realized his climb up the world's tallest mountain was over. But before he left, he helped families rebuild their villages. It is that experience Land says is much bigger any expedition.

\"I didn't go to Everest to die or be in this avalanche,\" he said. \"I knew there was danger there, but you have to go live your life.\"

Andy says his one regret is not knowing if he would have reached the summit of Mt. Everest. If he had to decide today, he said he would not go back. But, in order to make a good, firm decision, he said he needs a few months.