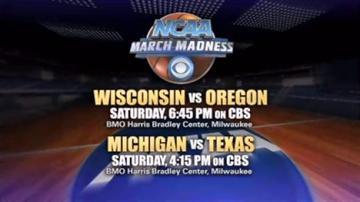 MILWAUKEE - Wisconsin found itself down 17-10 to American in the first half of its NCAA Tournament game Thursday, but recovered after halftime to pull off an impressive 75-35 opening round win in Milwaukee.

The Badgers closed out the first half on a 19-3 run before running away with it in the second half.

Traevon Jackson scored 18 points and Ben Brust scored 17 for the Badgers, who will play the Oregon Ducks in the Round of 32 Saturday at 6:45 p.m. at the BMO Harris Bradley Center.

The winner advances to the Sweet 16.

You can catch both games on CBS 58.