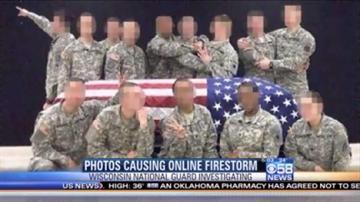 MILWAUKEE -- There's a firestorm brewing on social media over a number of photos that show National Guard soldiers posing in a less than respectful way with a flag-draped coffin.

The soldiers in the pictures are believed members of the Funeral Honor Guard representing several different states, but the picture was allegedly first posted by a guard member from Wisconsin. The caption below one of the photos reads, \"We put the 'fun' in funerals.\"

The Director of Communications Major Paul Rickert confirmed Specialist Terry Harrison posted this photo to her Instagram account. He also confirmed Harrison is a Milwaukee resident, and has been with the National Guard for a year.

Major Rickert tells CBS 58 News the coffin in the picture is empty, and the picture was taken during a training exercise in Arkansas.

Specialist Harrison has been suspended with pay for this incident. The Wisconsin National Guard is conducting an investigation picture.