Winterize your home before it is too late 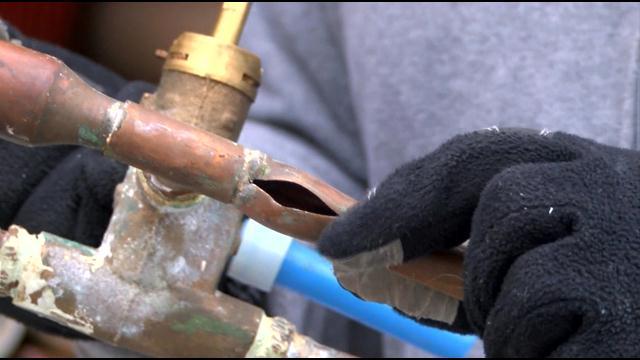 According to local plumbers, it's precisely this sort of wild temperature swing that can wreck havoc on your pipes. Nobody wants to have to remodel their home completely, especially not in the dead of winter. But one local plumber says if you haven't winterized your home. That could be a reality.

\"The pipes get frozen at the deeper temperatures but then as they start to thaw, that's when they burst and water starts spraying all over the place,\" said Rob Widowski, owner of R&B Master Plumbers in Muskego.

Widowski is helping completely rehab two floors of a Greenfield home that recently suffered severe water damage, thanks to pipes bursting. He says it is also completely preventable, starting with the outside of your home.

\"The first and foremost thing, any garden hoses that are hooked up, you should disconnect.That's the number one cause of burst pipes in our area because its exposed to the outside and the inside,\" said Widowski.

Then head inside to check out the pipes in your basement.

\"A lot of people don't go downstairs until there's a problem. But insulation; putting insulation on pipes is a big help,\" said Widowski.

Walk around your home. If you feel a draft, find out where its coming from and get it sealed up.

\"A big problem we see is a lot of drafts. Cabinets are closed up and there will be some sort of not insulated area where a cold draft is coming in and it'll freeze the pipes underneath the sink,\" said Widowski.

That goes for drafty windows too, which can freeze pipes near sinks or in bathrooms. Widowski says you'll notice the problems as the weather warms up but there are some clues your pipes are already frozen.

\"They haven't burst yet but people have no water pressure or low pressure. That would actually be a good indicator if you're living the home that your water pressure is low,\" said Widowski.

At that point, its time to call in a plumber to warm things up. They will slowly thaw out your pipes and then take the steps to winterize your home and prevent it from happening again. They also say you should have a plumber come in and expect and winterize your home at the start of winter. They say the cost associated with having a licensed professional do the winterizing for you will be far less than the thousands of dollars you'd have to pay to remodel your home.