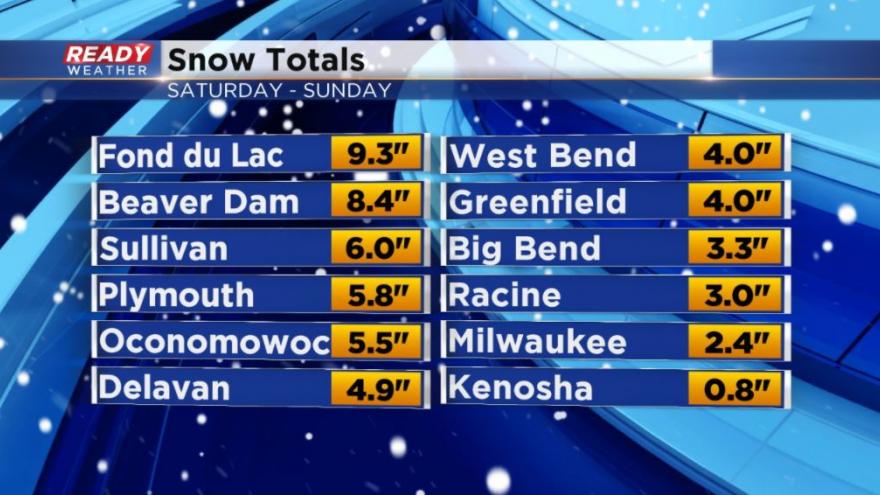 Light snow showers are still lingering across southeast Wisconsin. More showers are expected all night long and into Monday morning. Although snow may be falling for the Monday morning commute, the bigger concern is wet roads freezing over causing ice and slick conditions. Some accumulating snow may be possible Sunday night and Monday morning. Most of it should remain light with only a few tenths of additional snow for most. 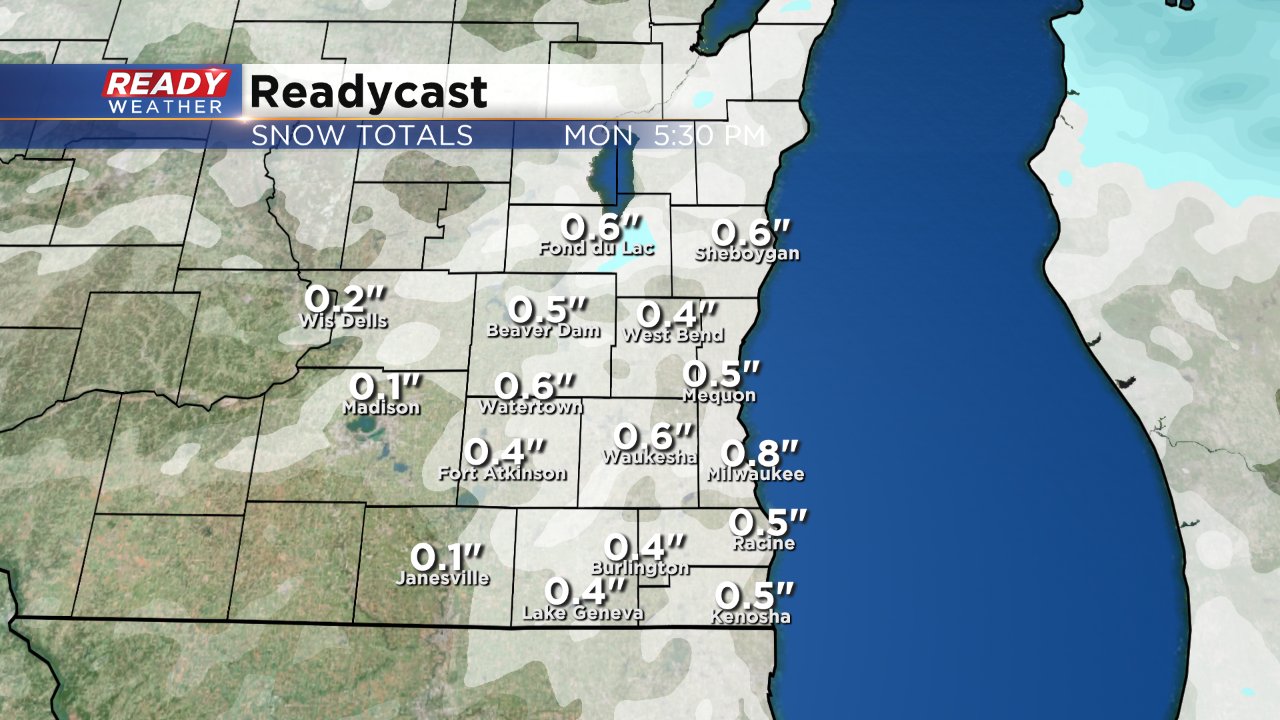 The heaviest of the snow has left and most of us are left with scattered light snow showers. Those showers will linger through the rest of Sunday and even into Monday morning. The majority of us won't see any additional accumulation, but a few could pick up another inch or two.

As the heavy snow wraps up, the snow reports are coming in. The official NWS report for Green Bay is 23.2" which will go down as the second highest snowfall on record there. But that's not even the highest, Stevens Point recorded 28" of snow!!! 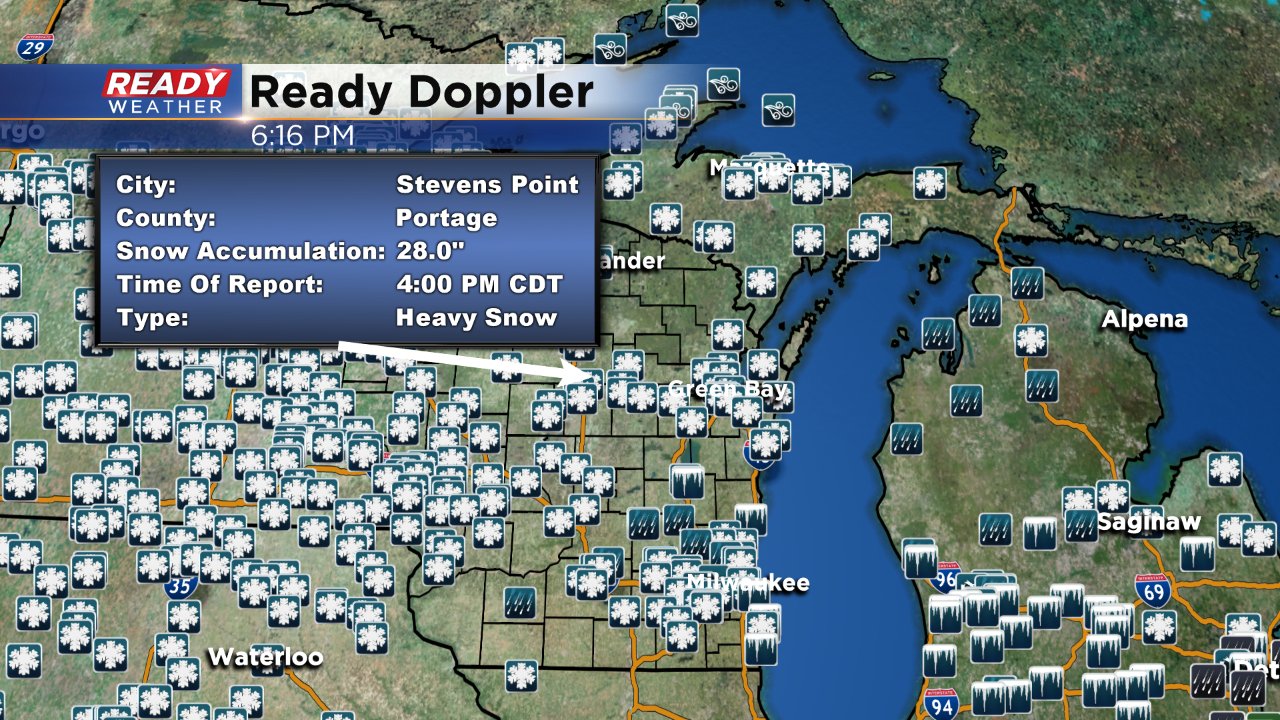 Locally some new reports in northern spots are coming in over 8" of snow. Western areas also saw a good helping with parts of Jefferson and Waukesha County seeing over 5". Milwaukee's airport had a good amount of sleet mix in so the total there is only 1.7".

The heaviest snow is moving north out of our northern counties. Scattered snow showers are still expected the rest of Sunday and even into Monday morning. The end of the steady snow will allow road conditions to improve quickly once plows and salt trucks hit them. Warmer temperatures help too with Milwaukee, Racine and Kenosha all sitting above 32°. 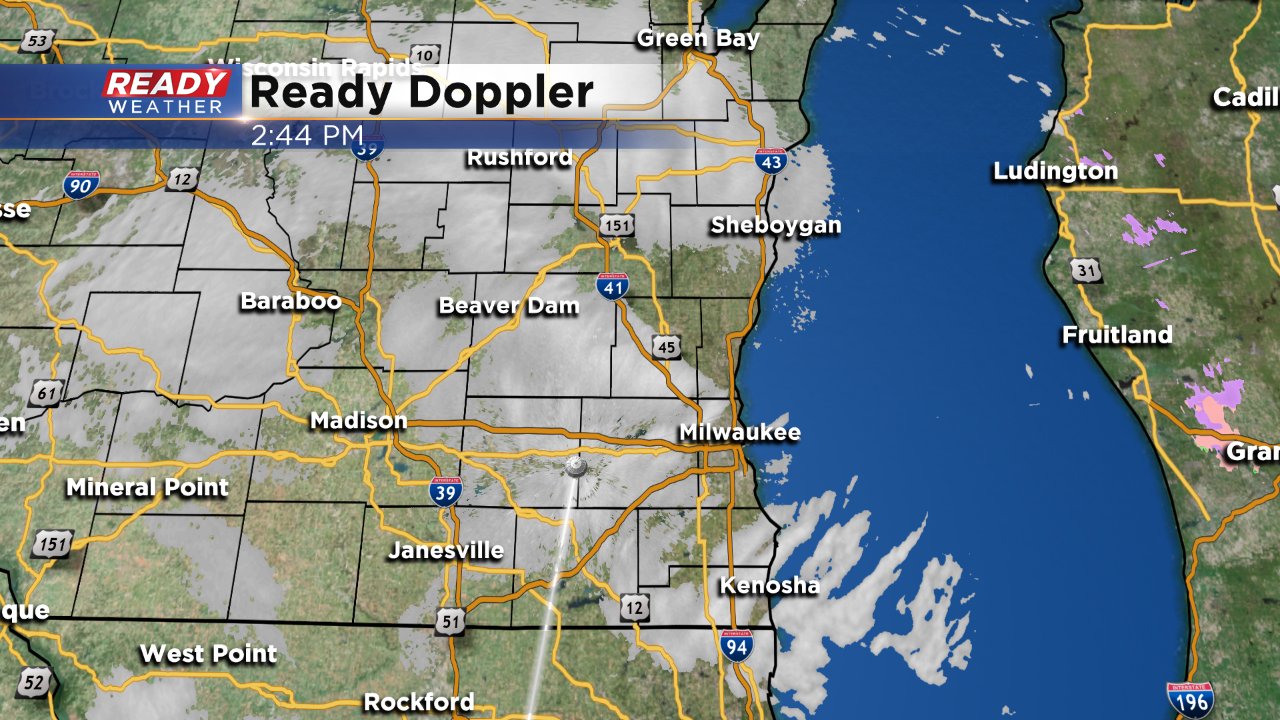 The NWS has made some changes to the end time of the winter storm warning and winter weather advisory. The end time has been pushed up to 7 p.m. 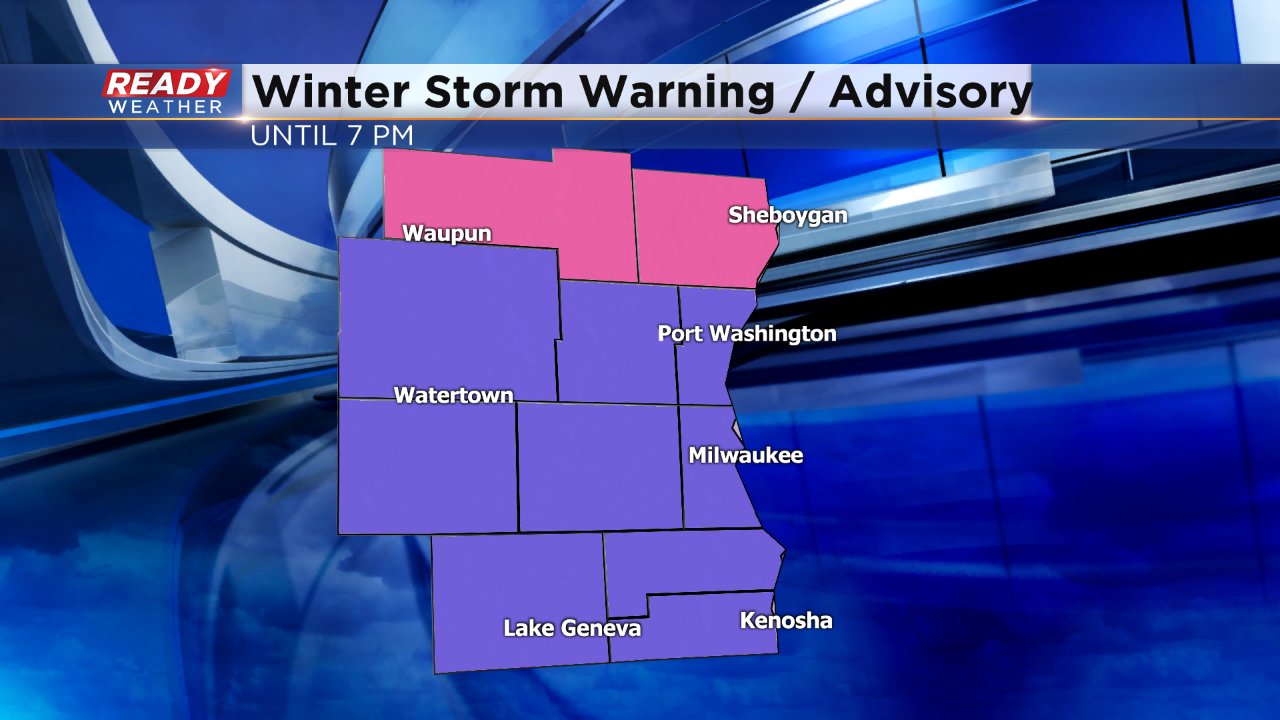 Sleet and wintry mix to the east is starting to switch over to heavy snow. The snow is so wet and heavy and the flakes are so huge that when they hit the ground you can literally see the moisture splashing up out of them. 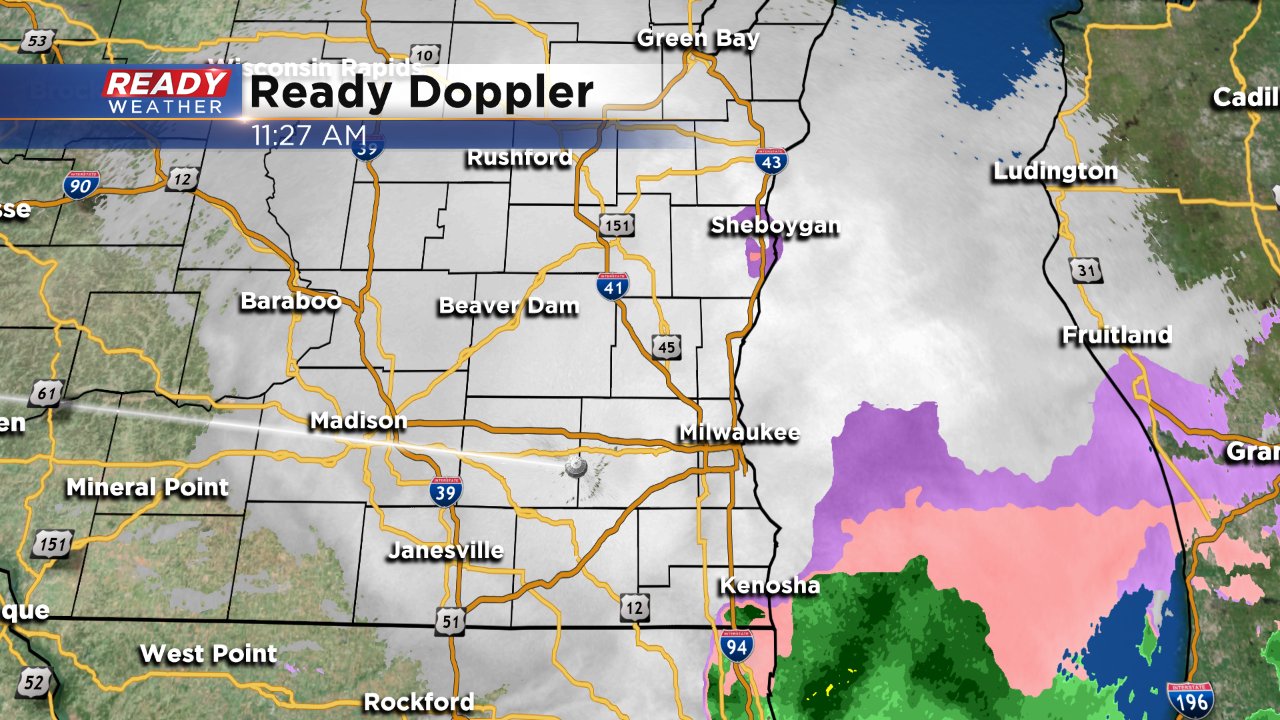 Updated snow reports show some northern spots closing in on 6". Most of southeast Wisconsin has picked up 2-4" and the majority of that has been sleet. This is a very heavy and wet snow heavy enough to cause health issues so take your time. The forecast is still on track for mainly 2-5" to the south and 5-8" in the winter storm warning area. 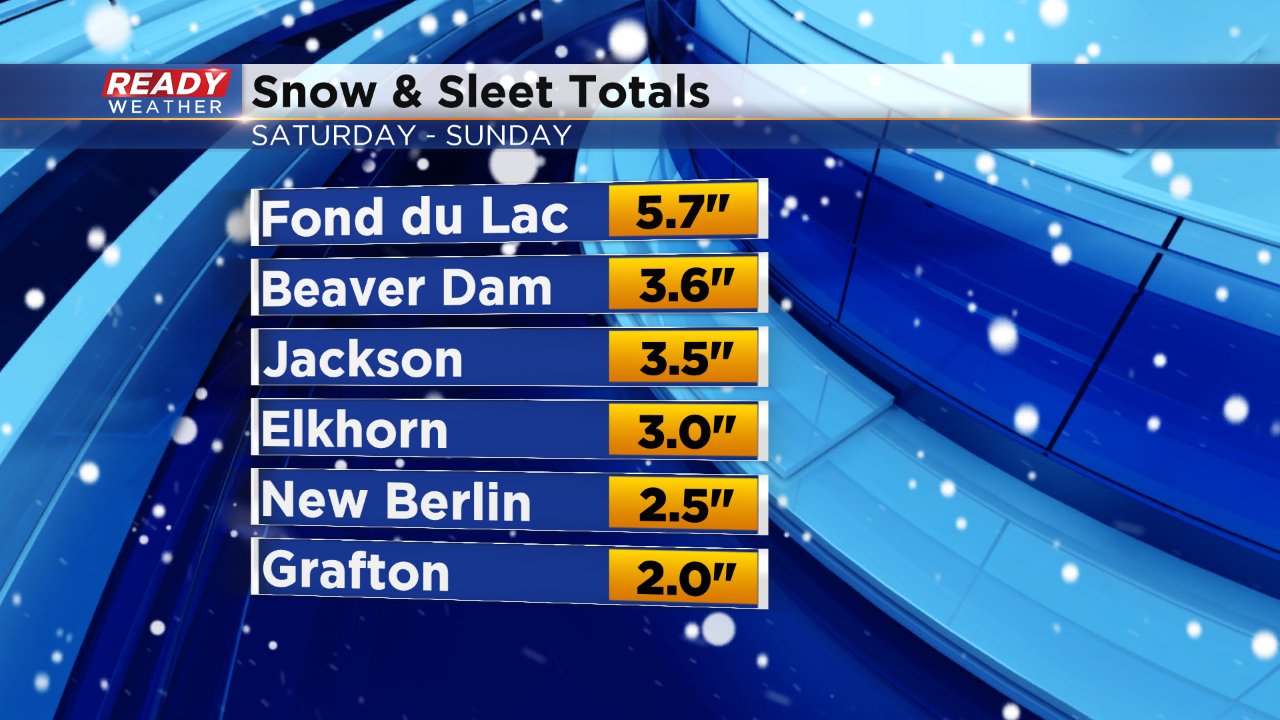 We are still getting reports of freezing rain in southern spots. The latest report out of Kenosha has .10" ice on tree branches, while many other main areas are still in that snow and sleet mixture. Northern spots are starting to see more snow accumulate. Here's the latest reports: 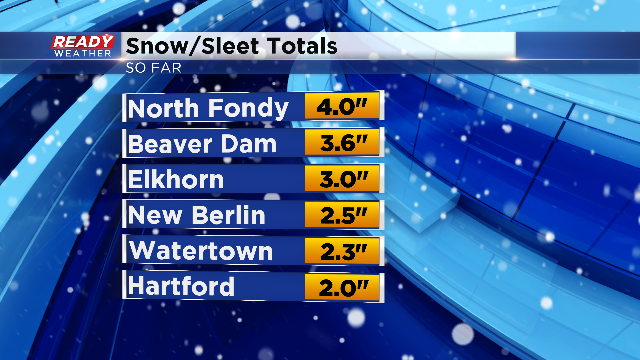 Several inches of accumulation is still on track for most of the area, and the forecast graphs below show that well. Additionally, we are seeing some greatly reduced visibilities. Travel conditions will be in poor shape for the better part of the day with continued wet weather, which in time does change to all snow. 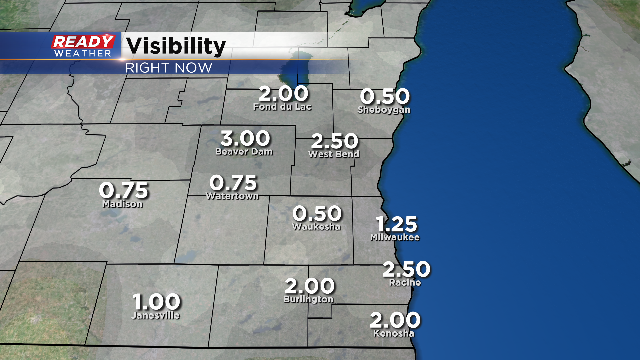 It could always be worse, take a look at this photo just west of Green Bay! 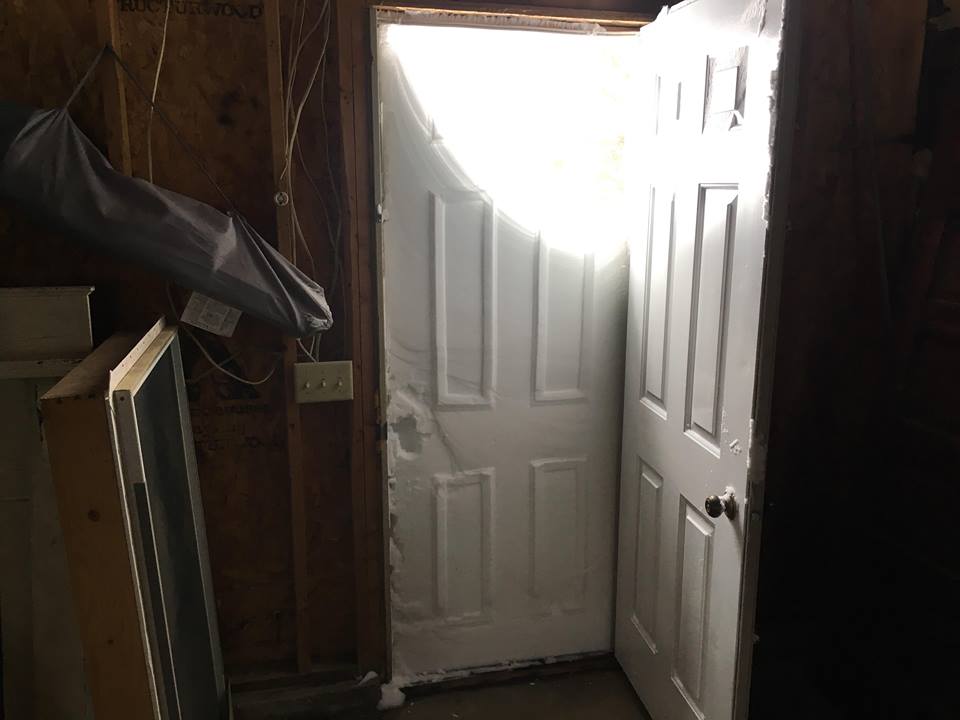 More storm reports are coming in, take a look: 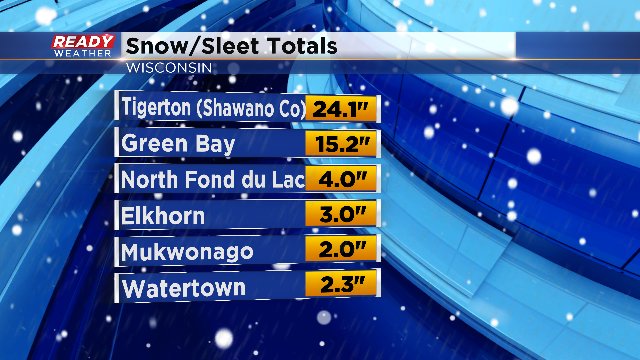 Even though conditions have been poor in our area, I'd be remiss if I didn't point out the historic snowfall that is piling up with this storm, across central and northern WI. And we're slowly starting to see more snow mix in over sleet here locally. That means accumulations are still likely over the next several hours. The heavy precipitation and wind has put tens of thousands without power at times over the weekend. Even though major roads are being treated, the persistent precipitation is still evident on most main and secondary roads. A mix of sleet and snow is on for the remainder of the morning for our major cities, with primarily just snow for the afternoon. As we get into mid afternoon the activity should become scattered in nature, as shown here. 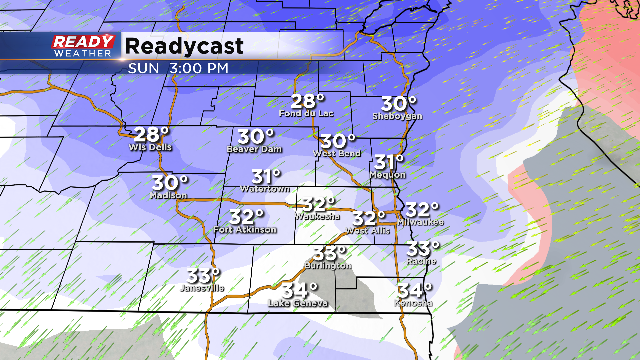 After sunset it should be ending in many spots or reduced to just isolated pockets of snow showers.

We're seeing just a few minor improvements as this storm rolls on, mainly with lower wind gusts today. While some spots had whipping gusts over 50mph yesterday, more of us will stay in the 30mph range for gusts today. The mixed precipitation of mainly snow and sleet continues this morning. Most spots are reporting about one to two inches of heavy wet snow/sleet combo on surfaces. Elevated surfaces, like cars, still appear ice covered. 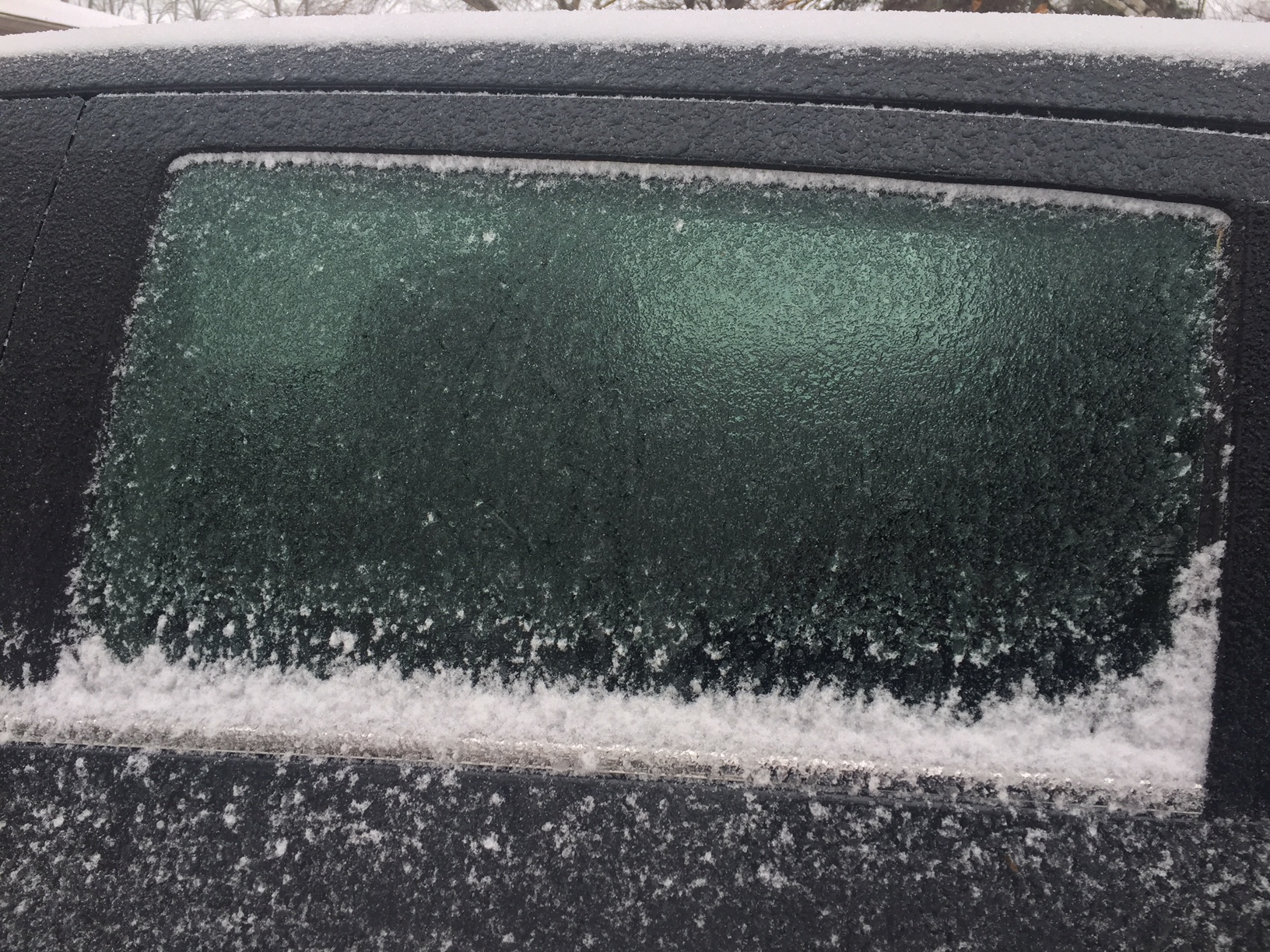 Main roads are reported as "ice covered" from a West Bend to Belgium line and points north. Elsewhere conditions are reported with "slippery" stretches. Secondary roads have a crunchy coating of snow sleet and some iciness underneath. Please continue to use extreme caution if you do have to travel this morning. 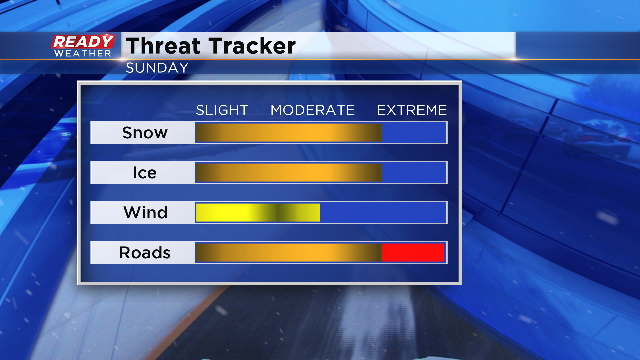 This steady precipitation will stick with us during the remainder of our morning. By the afternoon it should taper to more of just snow and it will become scattered in nature.

Heavy snow has started falling in some northwest spots with heavy sleet moving in from the south. Heavy precip will continue to move in from the south. Snow totals are still on track with 2-5" for most and a little more in the winter storm warning.

Wind stays gusty to 40 mph with downed trees and power lines possible. Over 30,000 customers have already had power restored but thousands are still without electricity.

Heavy precipitation is starting to arrive with snow falling in many western spots and a sleet, freezing rain mix to the east. Condiditons will likely stay this way for most of the night before everyone gradually switches to snow Sunday morning. 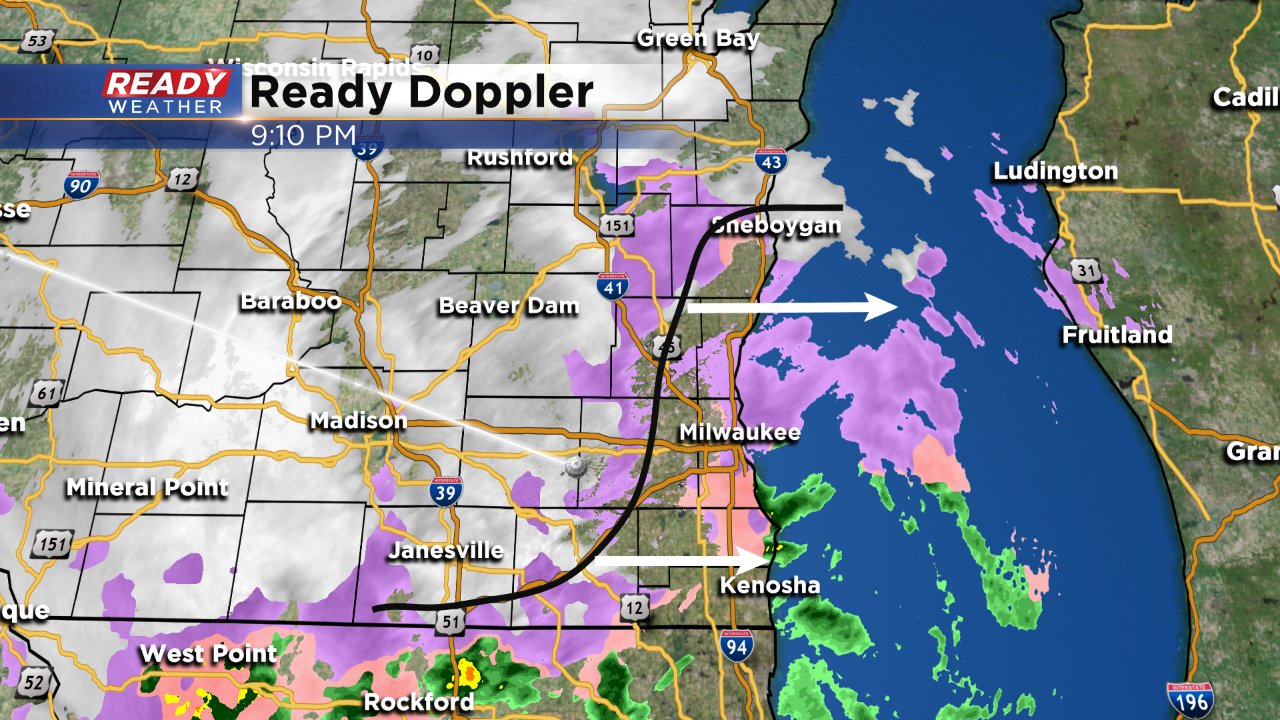 The winter weather advisory has been expanded to include Milwaukee, Racine and Kenosha Counties. The advisory lasts until midnight Sunday night. A winter storm warning is still in effect for Fond du Lac and Sheboygan Counties. 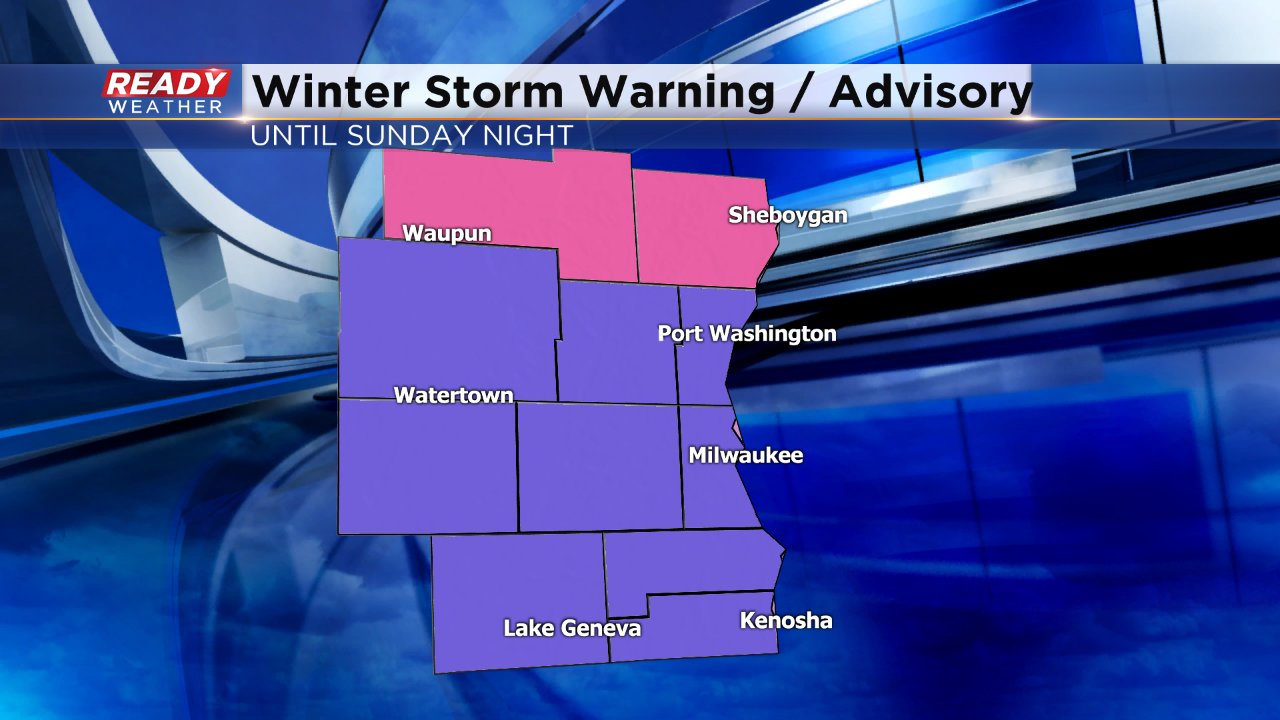 Temperatures did fall fairly quickly this evening into the upper 20s to the north and right around freezing to the south. Slick roads are likely all night long. Travel is not advised.

Saturday has been gross all over southeast Wisconsin. The day started with some freezing rain in norther communities causing issues on the road and everyone has been dealing with heavy drizzle and strong wind gusts. Peak wind gusts for the day have ranged from 45 to 50 mph for most. Sheboygan takes the top of the list with a gust to 52 mph. A wind advisory expires at 7 p.m. but wind will still stay very gusty all night and Sunday with gusts to 40 mph still possible. 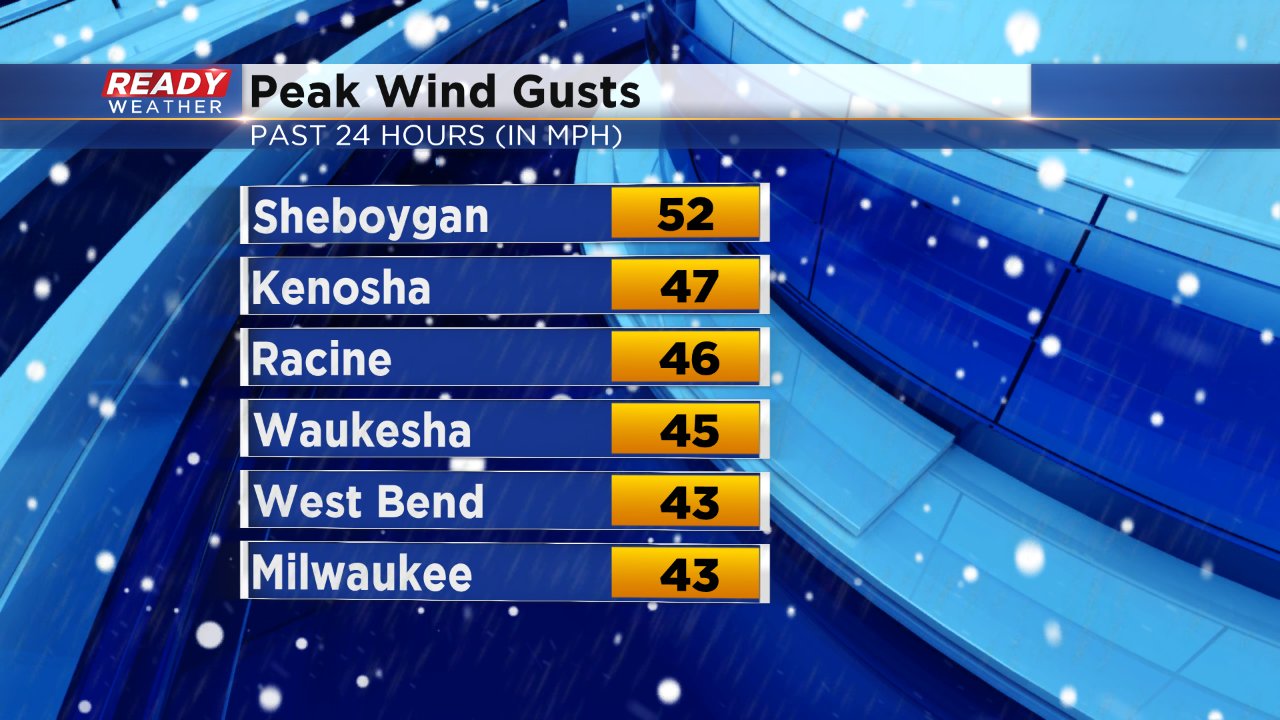 Although Saturday has been gross, most of the precipitation has been light. That changes Saturday night when heavy sleet and snow starts moving in around 9 p.m. and lasts through Sunday morning. This is when the bulk of snow and sleet accumulation will occur. 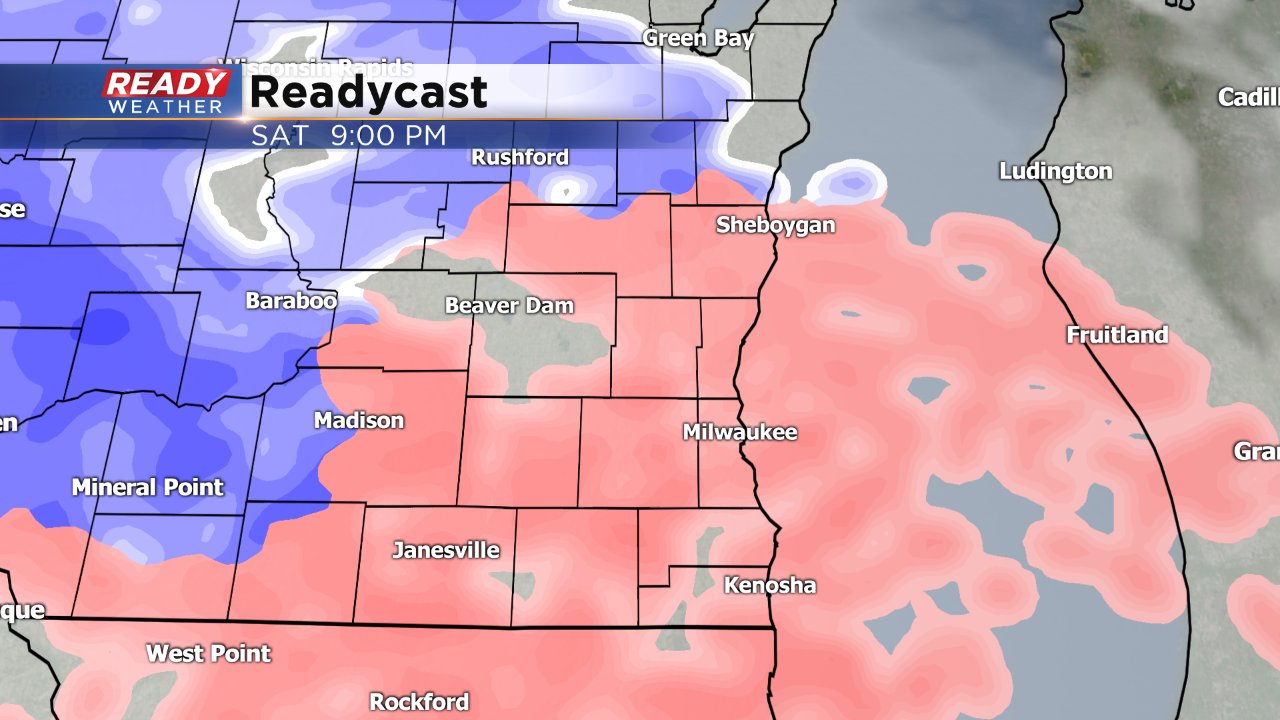 The precipitation will stay mainly sleet in southern spots until late Sunday morning, but will transition to snow Saturday night for northern areas. Some freezing rain may mix in at times, but widespread icing is not expected due to warmer ground temperatures. The more sleet you see the lower snow totals will be since sleet really cuts into snow totals. 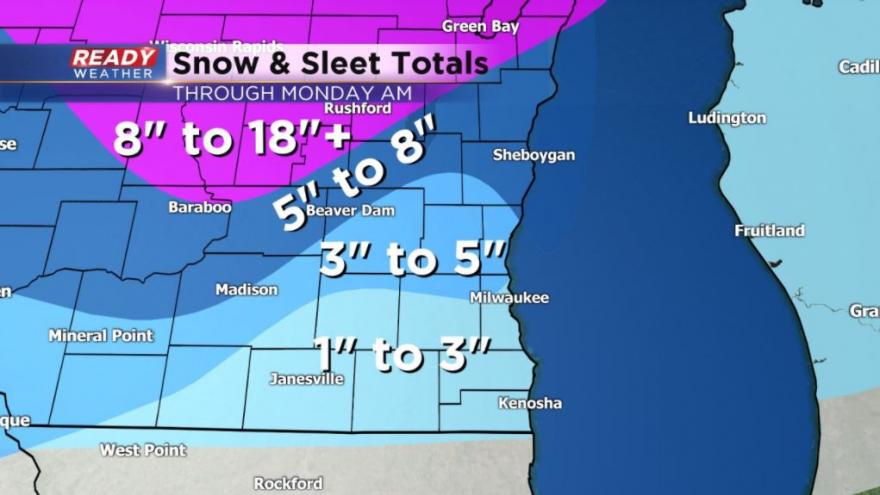 As shown above, snow and sleet totals have been increased for northern parts of the viewing area. The 1-3" to the south will be mainly sleet with some snow mixed in. Parts of Fond du Lac, Sheboygan and Dodge Counties may see over 5" of snow.

There are a few changes to the advisory and warning map with Fond du Lac and Sheboygan getting upgraded to a Winter Storm Warning and Walworth County getting added to the Winter Weather Advisory. Both warning and advisory expire at midnight Sunday night. 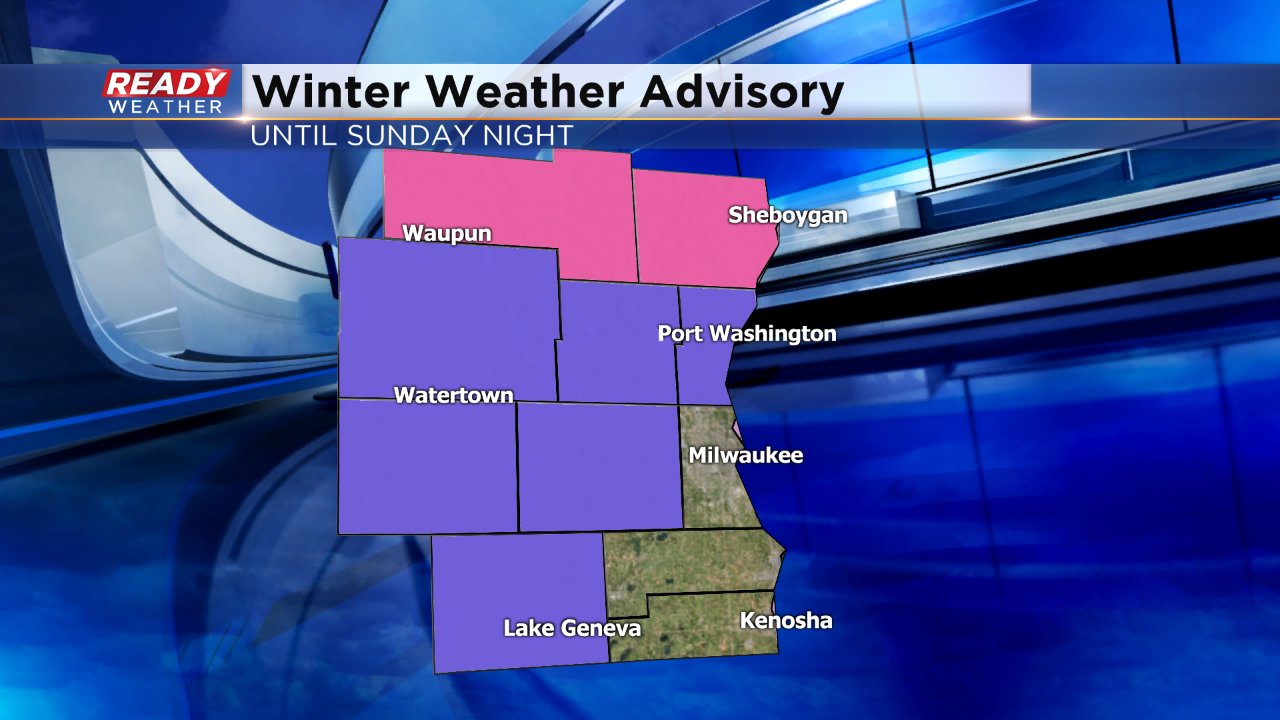 The combination of heavy precipitaiton overnight and wind gusts to 40 mph will likely cause more power outages and trees to fall. Those stay our main threats tonight. 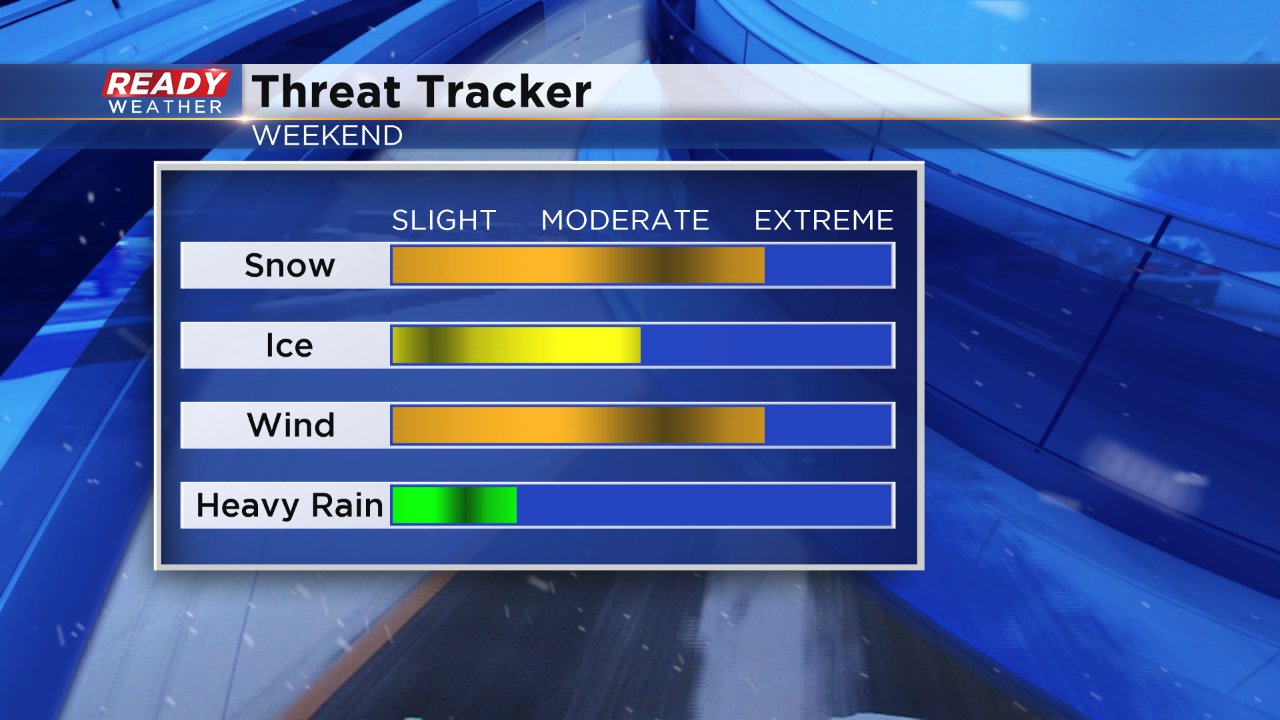 I would not advise traveling north Saturday night or Sunday morning. Road conditions will likely be near white out at times with snow covered roads. Travel to the south will mainly just be wet. 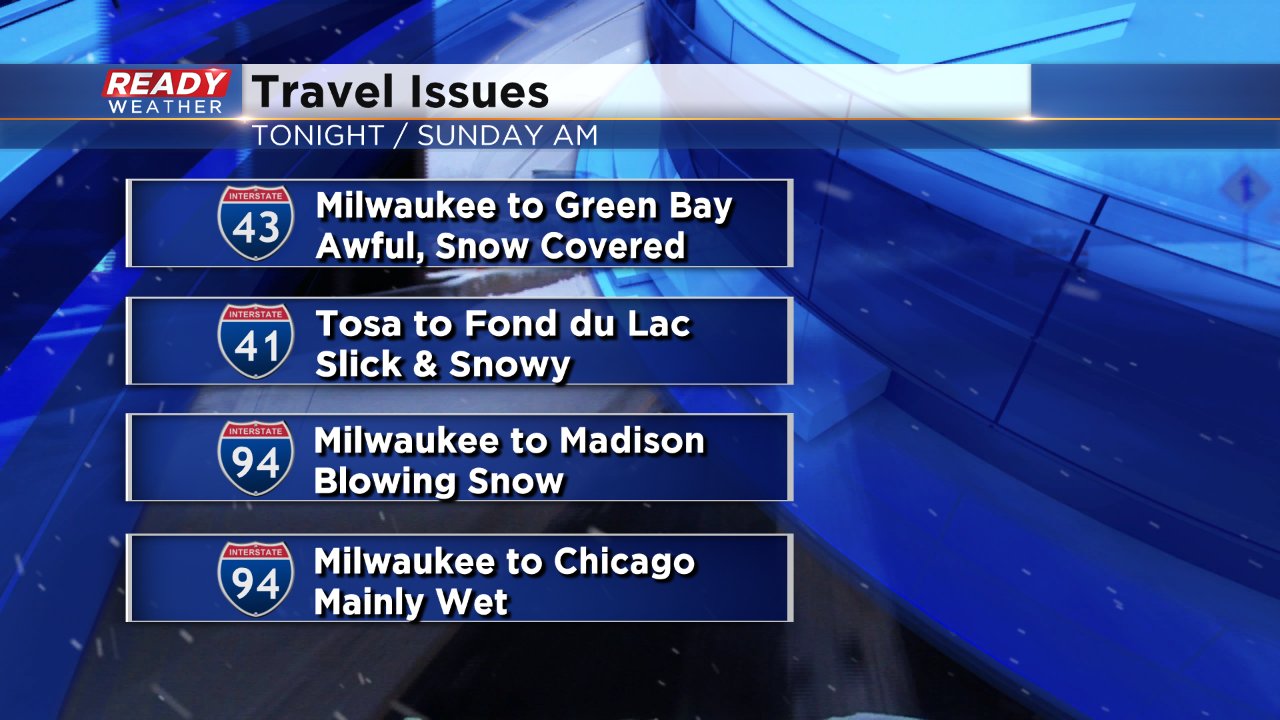 Download the CBS 58 Ready weather app to stay with any forecast changes and track the sleet and snow as it arrives.