Winter Storm: This Weekend's Snow in D.C. Could Be One 'For The Record Books' 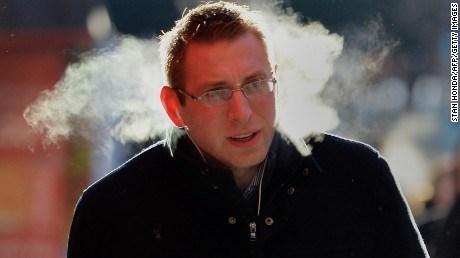 The National Weather Service on Wednesday said it expected between 12" and 24" of snow to fall in the District of Columbia, Baltimore and surrounding counties by late Saturday. Those totals could be adjusted up or down depending on the exact track of the storm, which is targeting the mid-Atlantic region.

CNN meteorologist Tom Sater says a computer model shows the capital will be the bull's-eye for up to 30" of snow by Sunday.

That would exceed the calamitous "Knickerbocker Storm" of 1922, which dumped 28 inches and killed nearly 100 people when the roof of a theater by that name collapsed under the weight of the snow.

"This is going to be one for the record books," Sater said.

Tens of millions of East Coast residents could be affected by the storm system, which will be ushered by ice. "Then the winds kick in," said Sater, downing branches and power lines.A blizzard watch is set to begin Friday afternoon and extend through late Saturday. But that could be upgraded to a warning by Thursday. The worst of the storm is expected Friday night through the day Saturday.

"Heavy and blowing snow will cause dangerous conditions and will be a threat to life and property," the weather service said. "Travel is expected to be severely limited if not impossible during the height of the storm ..."

Sater said winds could gust at 50 miles per hour and higher.Communities along the East Coast were preparing for the wintry onslaught, piling up salt and positioning snow plows. A light snow fell Wednesday night in the capital, a precursor to the expected big event this weekend.

Police were investigating whether a single-fatality crash in Bedford County was related to the weather. A state trooper was taken to a hospital for minor injuries after being struck while responding to a crash on I-495 in Fairfax County. A van swerved to avoid another car and struck the trooper outside his vehicle, officials said.

Even the commander in chief had to reckon with the wintry mix. Video shows President Barack Obama's motorcade using hazard lights as it made its slippery way from Joint Base Andrews to the White House. He was unable to fly on Marine One because of the weather.

The manager at Strosniders Hardware in Silver Spring, Maryland, told CNN affiliate WJLA that customers had bought almost all of his ice melt chemical.

"They know (the storm is) coming," Roy Washington said. "They hear the forecast, and they want to be prepared for it."People were also buying heaters, shovels, and sleds, WJLA reported.

Washington Mayor Muriel Bowser said, "If this is a blizzard and we have sustained winds and people lose power and it is cold over a sustained period of time, that would be my biggest concern."

The mayor's office advised residents to stay off the roads late Wednesday to allow crews to treat the roads.

Nearly 2 feet of snow fell in February 2010's "Snowmaggedon" storm, which cut power to hundreds of thousands in the region."The storm is moving out of Colorado and here it comes," said Sater.

Talk of a possible blizzard came on the same day the federal government reported that 2015 was the Earth's warmest since record-keeping began in 1880. But big snows can occur even in the warmest years. Despite the snowiest winter on record for Boston, the state of Massachusetts still ended 2015 with temperatures far above average.