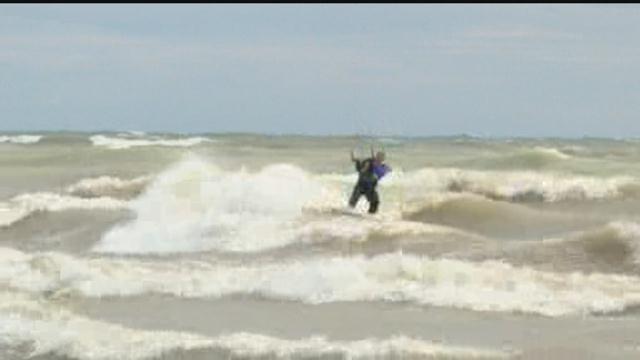 High winds mean high waves on Lake Michigan this week. It has already reported higher than average depths this year.

NOAA, the agency in charge of monitoring the lake, reports in September the lake was up about two feet from just two years ago.

It's also an upward trend reversing about 15 years of below average water levels.

30 mile and hour winds blew across Milwaukee's Braddock Beach on Saturday. Gusts carried sand and a man by the name of Stafford Kramer.

"And right now it's kind of gnarly and beginners can't really be out here," Kramer said.

"And so I'm working with the wind and the water to go where I want to go and to use the waves as ramps or surf style to just ride them as surf waves," Kramer said.

This is prime season for kiteboarders and this week has also been unusual. There have been five days of good wind in a row.

But there are long term difference as well, Kramer said.

"The lake and the beach and the shoreline here is definitely different from even last year. I've never seen the water this high at the beach," Kramer said.

That was part of the problem along Erie Street where boat dock along the lake, employee at Carefree Boats Steve Townsend said.

The wild movements in the water sheared pins and screws pulling the docks off the wall causing major damage. The boats, however, were left in good condition.

"There's a phenomenon known as seiche where the water flows in just because of the gravity. And right now, just because we've got so much wind pushing the water in what's happening is the docks are actually raising up," Townsend said.

"Plus we've got huge waves coming in here so the docks are going up and down. They're pitching and rolling," Townsend said.

On a grander levels, NOAA analysts say low seasonal evaporation and high precipitation could be a cause behind the lake's rapid rise.

The areas around the lakefront reflect the change more dramatically than others.

"This is kind of for me on a mellow day like a meditation," Kramer said. "On a day like today this is more like aggressive, go at it, hammer kind of day."

"We'll take whatever we can get as kiteboarder. We're glad to have it," Kramer said.