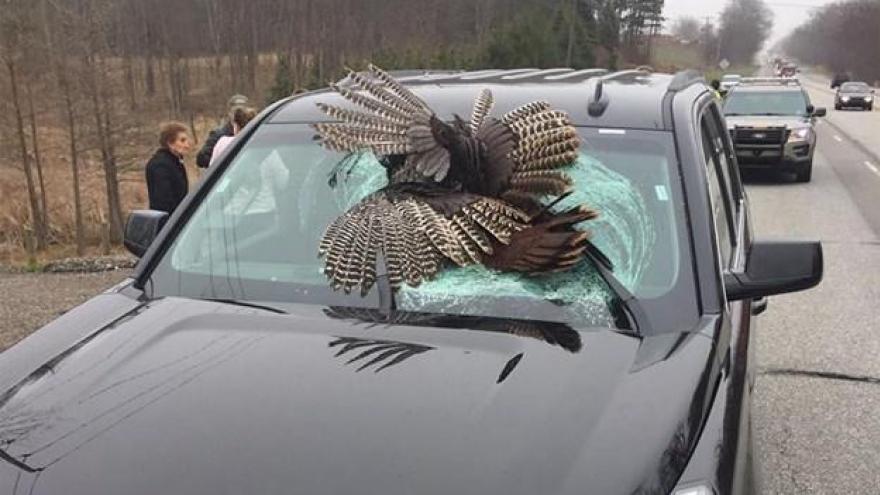 NEW YORK (CBSNewYork) – One New Jersey family got a lot more than they bargained for while visiting a college.

A 30-pound wild turkey smashed through the windshield of their SUV in northwest Indiana Tuesday.

The Taraboczhia family from Emerson, N.J. were visiting the University of Notre Dame and were driving on US 20 in La Porte County, Ind. when a wild turkey flew into their path, according to the La Porte County Sheriff’s Office.

The family suffered minor injuries. The Tom was killed on impact.

“We’ve had incidents of turkeys striking vehicles in the past but I don’t think anything nearly as this dramatic,” LaPorte County Sheriff’s Capt. Mike Kellems told WBBM.

“Mating season for wild turkeys means that they are often on the move and can be as hazardous as deer,” the La Porte County Sheriff’s Office wrote on Facebook.

The family said they’d be eating ham for Thanksgiving this year, and a passerby was given permission to keep and eat the turkey, WBBM reported.

There have been other similar incidents elsewhere.

Just yesterday, a wild turkey smashed through a library window in Monroeville, Penn. In New Hampshire, a 19-pound Tom smashed smashed into the cab of an 18-wheeler last week.