Widow calls out robbers who struck as her husband was dying 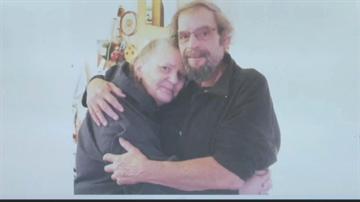 CLEARLAKE, Calif.(CBS NEWS) --A Northern California woman has authored a unique letter of appreciation to the criminals who used a family tragedy to rob her home, CBS San Francisco reports.

On the evening of Feb. 16, Naomi Richmond's husband, David, was struck by a massive heart attack in their home near Clearlake. As she followed the ambulance to the hospital, someone used the tragedy to break in and ransack her home.

David Richmond died on the way to the hospital.

\"I heard this crash, and I went running in there and my husband was just…gone,\" recalled Richmond. \"They either saw the ambulance and me leave, or they heard it on a (police) scanner…it was just…why would somebody do that?\"

The thieves took Naomi Richmond's heirloom jewelry and David's guns and iPad. They even stole the pillowcase off his pillow. That was it for Naomi; she sat down and wrote the thief a letter.

To whomever this may concern:

Thank you to whomever it was that was so thoughtful that they found it necessary to kick in my front door and rob my house when I left to follow the ambulance to the hospital when my husband David died last night.

You have saved me from having to come home and look at David’s laptop and his guns, his prescriptions, all my jewelry, which included the ring that David’s mom gave me right before she died.

But, most of all thank you so very, very much for taking David’s pillowcase off of his pillow. I know you needed it to carry the drawers from my jewelry box so you wouldn’t drop them and damage them.

With that single act of kindness displayed by you, you saved me from ever having to lie in our bed and be able to still smell David’s scent while I slept. So, thank you so much for thinking of me and removing the things from my house that you knew would remind me of him.

The letter is remarkable for its brutal sarcasm, thanking the burglar for removing so many reminders of her husband.

The local newspaper ran the full letter and then it hit Facebook. Now, after more than 11,000 views, it's been seen as far away as Australia.

\"It kinda made me laugh a little, cause I've grown up with her\"” said son Todd Rasmussen.

She's also a woman who can face tragedy with defiance and a sense of humor.

Naomi and David Richmond were set to celebrate their 25th wedding anniversary next month. Her daughter has set up a GoFundMe account to help pay for David’s burial costs.