Why the Senate Keystone vote is important 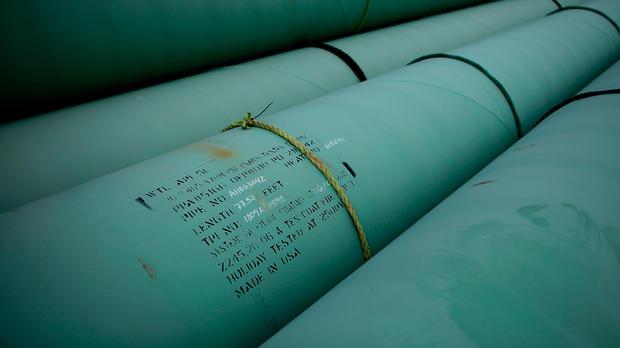 The fate of the controversial Keystone pipeline isn't the only thing at stake during a crucial vote in the Senate on Tuesday.

A vote to move forward on legislation approving the pipeline's construction would usher in a new era of animosity between resurgent Republicans in Congress and President Barack Obama. It could also determine the fate of embattled Democratic Sen. Mary Landrieu of Louisiana, who is pushing the legislation in an uphill battle to fend off a GOP challenger in a runoff election next month.

Landrieu is very close to securing the support necessary to advance the legislation. All 45 Republicans will vote for the measure and 14 Democrats are on record supporting her. But she needs one more Democrat to join her to reach the critical 60 vote threshold.

By Monday night, she said she had the votes necessary.

It's not clear whether she actually won someone over or was just expressing confidence ahead of a vote that could determine her political future.

The GOP-led House on Friday approved a measure that will skip the conclusion of the six-year-old State Department review of the pipeline and authorize its construction. If the Senate ultimately approves the measure, Obama could be poised to issue what would be just the third veto of his nearly six year presidency.

At a news conference last week, Obama made clear that he doesn't want Congress to interfere with the State Department's process.

\"Understand what this project is: It is providing the ability of Canada to pump their oil, send it through our land, down to the Gulf, where it will be sold everywhere else. It doesn't have an impact on U.S. gas prices,\" Obama said at a Friday news conference in Myanmar.

The showdown comes as Obama and congressional Republicans appear to be on a collision course over immigration. Republicans are considering how to respond if Obama follows through with a pledge to revise immigration policies by the end of the year. Some GOP lawmakers have talked about potentially shutting down the government if Obama keeps that promise.

On Keystone, Senate Democrats are moving toward a vote largely to help Landrieu, the Senate Energy and Natural Resources chairwoman. She is facing off in the December runoff against Republican Rep. Bill Cassidy, who sponsored the House's Keystone bill and has been promised a seat of his own on the energy panel.

The measure offers Landrieu a final chance to demonstrate her clout before voters return to the polls.

The list of Landrieu's potential Democratic allies to provide the final vote, though, is dwindling rapidly.

One of Landrieu's top targets, West Virginia Sen. Jay Rockefeller, said he won't support the measure. Another potential backer, Maine Sen. Angus King, an independent who caucuses with the Democrats, said he is leaning against supporting the bill.

Landrieu's entreaties to other Democrats have also been rejected in recent days. Outgoing Michigan Sen. Carl Levin won't support the pipeline, a spokeswoman said Monday. Nor will New Jersey Sen. Cory Booker, who tweeted his opposition over the weekend.

Senate approval of the Keystone pipeline is all but guaranteed, with Republicans set to take control of the chamber in January. The only question appears to be timing.

As Landrieu and her allies search for Democratic support, the pipeline is also becoming an issue in the 2016 campaign.

New Jersey Gov. Chris Christie announced Monday that he is planning a two-day swing through Canada in December. That trip is expected to included an energy speech that addresses the Keystone pipeline.

\"My view is that we are missing an enormous opportunity when we delay development of the Keystone XL pipeline,\" Christie said in a speech during a recent trip to Mexico. \"Not only is Keystone a major job creator, delays in its approval sends an unfortunate signal on multiple fronts.\"

Today 79° Times of sun and clouds