Why New Minimum Wage Hikes are Under Threat 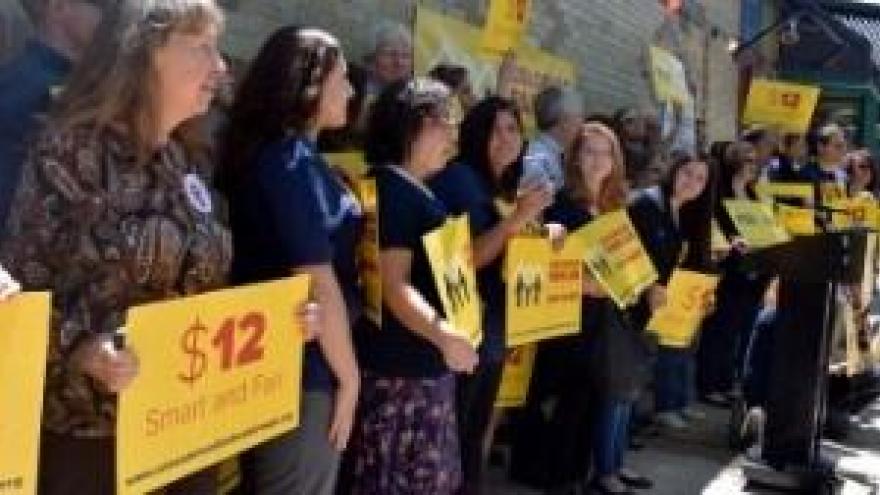 EDITOR'S NOTE: Jonathan Schleifer is the executive director of The Fairness Project, an organization that supported successful state-based ballot initiative campaigns in 2016. The opinions expressed in this commentary are his.

(CNN) In Maine, Arizona and Washington state our democracy is under assault. And this time, Russia isn't to blame.

Last November, voters in those states resoundingly approved ballot initiatives to raise minimum wages. Arizona and Washington also approved an expansion of paid sick leave. In fact, in each state, upping the minimum wage got significantly more votes than the winning presidential candidate.

That should have been the end of it, a long-overdue victory for workers. But opponents of these ballot measures have continued to reject progress. In the past month, lawyers and lobbyists -- including those representing Chamber of Commerce groups, the National Restaurant Association and the National Federation of Independent Businesses -- have been fighting to undermine the clear will of voters and claw back the wage hikes.

If their efforts are successful, they will take money from some of America's hardest-working and lowest-paid employees. Higher wages for millions kicked in on January 1 and by the end of the year are estimated to put over $2.9 billion more into worker' pockets.

In Maine, more than 76,000 voters' signatures put Question 4 on the ballot. It promised gradual increases to the minimum wage for 181,000 people and eliminated the subminimum wage for tipped workers.

The Restaurant Association is attempting to gut the ballot initiative by restoring the subminimum wage. Maine's Republican Gov. Paul LePage has been a vocal critic of the minimum wage increases, so it's no surprise that his fellow Republicans, who control the Senate, support repeal. Unfortunately, some Maine Democrats, despite holding a majority in the House, are breaking with the nearly 56% of voters who supported the increase.

In Arizona, Proposition 206, which gradually increases the minimum wage to $12 per hour by 2020 and guarantees paid sick leave, won nearly 60% of the vote. But just one month after the election, business interests, including several Chambers of Commerce, filed a lawsuit to stop the increase from going into effect.

So far, the courts have sided with workers, with a Maricopa County Superior Court judge ruling last December that "delaying the promised pay raise would impose a significant hardship on low wage workers. ..." The case is now before the Arizona Supreme Court.

Meanwhile, Arizona special interests are pushing to undercut the democratic rights of Arizonans to mount ballot initiatives to get around ineffectual legislatures. Recently, Arizona's House passed four bills and a constitutional amendment that, if signed into law, would create new roadblocks to make it more challenging for citizens to have successful ballot wins in the future.

House Concurrent Resolution 2029, for example, would require thousands more signatures to move future ballot initiatives forward in the state. Such actions would cut off voters' ability to make democratic change when our stagnant political climate fails them.

Lastly, in Washington state, lawyers from the National Federation of Independent Business filed a lawsuit trying to discredit the election results, claiming the initiative was too sweeping to be on the ballot. While a court date is pending, the 57% of Washingtonians who voted for the wage increase won't stay silent.

Although these days it seems all eyes are on Washington, D.C., we can't lose sight of what's happening to everyday Americans in these states. Powerful forces are attempting to erode our democracy, and that affects real lives. In Arizona, Maine and Washington, the medicine, food, and rent of 1.69 million minimum wage workers are on the line.

And the will of American voters could end up being turned into a joke. Our democracy is too important to allow that to happen.