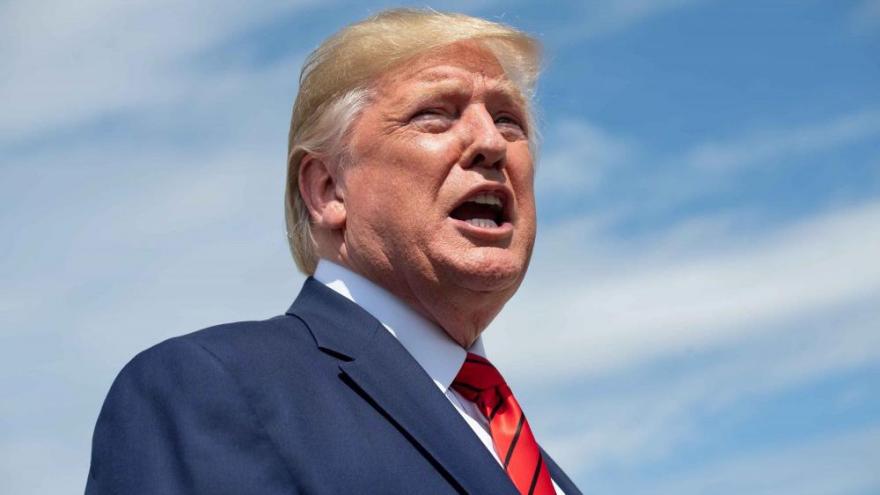 (CNN) -- In a new set of documents, which President Donald Trump unveiled during an early evening press briefing, the administration offered a blueprint for coronavirus testing laying out where it sees the boundaries between federal and state responsibilities.

But the White House said Monday the federal government should act as the "supplier of last resort" for the tests as it works with states to ramp up a testing regime that health experts say is necessary before a national reopening.

Instead, states should "develop testing plans and rapid response programs" and "maximize the use of all available testing platforms and venues," according to the copy of the blueprint.

States are also instructed to "identify and overcome barriers to efficient testing," including "misallocation of supplies" and "logistical failures."

And they are told to develop their own contact tracing programs that would identify and isolate people who may have been exposed to the virus. The federal government will provide "technical assistance" through the US Centers for Disease Control and Prevention, the document read.

The private sector should "develop new technologies" and "accelerate production of tests and materials," according to the document. It also states the federal government is working with private companies to accelerate the production of "highly specific and sensitive antibody tests," which could detect whether a person has previously been exposed to the virus.

Trump on Monday again claimed the United States was "lapping the world on testing," though per capita testing rates in the US remain behind other nations and health officials still warn there isn't enough testing for states to safely reopen.

A White House official said the goal was to help each state reach the ability to test at least 2% of its residents, with a particular focus on vulnerable populations and emergency workers.

The documents also lay out what the administration has done so far to ramp up testing, including strengthening the US supply chain for supplies and testing kits.

Trump has come under withering scrutiny for his handling of the coronavirus pandemic in the United States, particularly testing missteps early on that hampered the country's ability to detect outbreaks.

It was only last month that Trump stood in the same Rose Garden to preview widespread drive-through testing sites, all cataloged on a Google website. None of that materialized; when questioned about the discrepancy on Monday, Vice President Mike Pence insisted there was a misunderstanding "between having a test versus having the ability to actually process the test."

The President has insisted the country is now testing more people than any other nation, and has said individual states should be responsible for ensuring enough tests are available and used to contain the virus.

Members of the President's task force have been working for weeks to stand up a more robust testing strategy as Trump agitates to open up certain parts of the country, the majority of which remains under state-enacted lockdowns.

But key to reopening, experts say, is the ability to detect the virus and trace its spread. Though the White House spelled out a three-phase plan for reopening earlier this month, the guidelines did not contain specific information about how to proceed without widespread testing.

The new documents are meant, in part, to offer more granular guidance. In the blueprint, responsibility for setting up testing plans is shifted to states and the private sector.

"Testing plans and rapid response programs will be federally supported, state managed, and locally executed," reads the blueprint document, which was obtained by CNN.

In an overview of the plan, the federal government's role is described as providing "strategic direction and technical assistance regarding the best use of available testing technologies" and "expedited regulatory authorizations" for tests.

But the document says the federal government should act only as the "supplier of last resort" for testing materials.

Trump and members of his coronavirus task force laid out the materials in a midday call with governors on Monday.

According to one participant, the governors were told that the task force is currently collecting and culling the individual states' needs for testing and "will get back with specific commitments and timelines over the next couple of days."

Speaking on the call, the President's senior adviser and son-in-law Jared Kushner touted steps the US has taken to build a "robust testing system" and praising federal government, state and private sector engagement.

The administration, he said, is "working very hard to really open up the supply chain on tests and we feel very confident now that we'll be ahead of a lot of states in making sure there's enough swabs, transport media and reagents and machines, obviously, in the system to enable all of you to grow at the rates at you are," according to audio obtained by CNN.