What we learned at the town hall 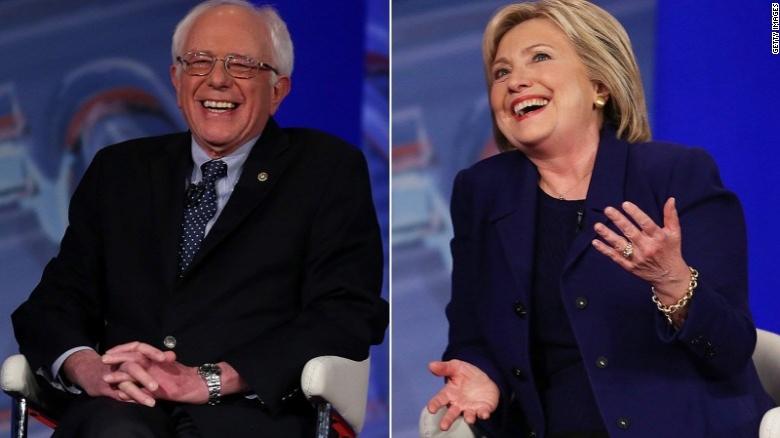 (CNN)In a campaign that's been filled with zingers and gotcha moments, Wednesday night's CNN Democratic town hall with Hillary Clinton and Bernie Sanders got the candidates to slow down for a bit.

Both candidates engaged with the audience and were at their best when getting away from the talking points so familiar to many by this time. Then again, each were faced with questions that demonstrated their weaknesses either in winning a Democratic primary or in November.

Sanders has increasingly highlighted Clinton's acceptance of hefty speaking fees from major corporations and Wall Street giants like Goldman Sachs, pointing to those speaking fees as evidence she can't be trusted to take on well-funded interests.

Clinton was tested Wednesday night on whether she can explain why she accepted those speaking fees.

Clinton began her answer: "I don't know, that's what they offered." She added that her talk on the campaign trail of prosecuting Wall Street's bad actors has reversed big bankers' perceptions of her.

"They're not giving me very much money now, I can tell you that much," she said. "Fine with me."

She was also asked, yet again, about her now 13-year-old vote to go to war in Iraq.

She has long admitted that vote as a mistake, and has a well-honed explanation of how she'd avoid similar mistakes in the future.

But the questions keep coming. Sanders, having voted against the war in Iraq, keeps reminding everyone about the differences between his vote and Clinton's. And he uses Clinton's Goldman Sachs speeches as a concrete sign of her connections to Wall Street.

Sanders' outreach a work in progress

The primary battle is now on friendly terrain for Sanders: a state that's overwhelmingly white and liberal. But it will soon shift west, to Latino-heavy Nevada, and south, to largely African-American South Carolina.

Clinton has a huge advantage among those voters -- and Sanders is still working to broaden his appeal, to explain his idea of "democratic socialism" and to get comfortable reaching out to specific populations.

Asked about police brutality and racial injustice, Sanders said it's "an important question that is on the minds of millions of people, not just African-Americans, but -- but all people."

And on religion, Sanders said that yes, he has strong religious and spiritual feelings, but rather than talking about faith he steered the conversation back to action and his campaign's economic themes.

"I believe that, as a human being, the pain that one person feels, if we have children who are hungry in America, if we have elderly people who can't afford their prescription drugs, you know what, that impacts you, that impacts me," he said.

"And I worry very much about a society where some people spiritually say, it doesn't matter to me, I got it, I don't care about other people. So my spirituality is that we are all in this together and that when children go hungry, when veterans sleep out on the street, it impacts me. That's my very strong spiritual feeling. "

Clinton knows she needs to cut into Sanders' massive advantage among young voters. And she got off to a good start Wednesday night, crediting "the level, the intensity, of commitment of this generation" on combating racism, sexism, homophobia, economic injustice and climate change.

She needled young voters the same way she'd privately told Black Lives Matter protesters, in a meeting videotaped and later released, that it wasn't enough to change hearts -- they needed to change policy.

"I'm impressed with them, and I'm going to do everything I can to reach out and explain why good ideas on paper are important, but you've got to be able to translate that into action," Clinton said.

"Here's what I want young people to know: They don't have to be for me. I'm going to be for them," she added.

But the very next question demonstrated why reaching those young people is so hard for Clinton.

And Clinton began her answer: "That's for Senator Sanders to explain."

What she said was that Democrats' progress on issues like health care was "hard fought for, hard won and must be defended."

What she meant came later in the evening, when she told a mother she wanted her 20-something daughters to press her on how she'd get her policy proposals past hurdles like a 60-vote filibuster in the Senate.

"It's very hard to see how any of his proposals could ever be achievable," Clinton said of Sanders.

Sanders often touts his tenure as the Senate's veterans committee chairman -- but along with that comes some baggage, such as the scandal-plagued Department of Veterans Affairs.

When CNN's Anderson Cooper asked about the 18 inspector general reports detailing problems there, Sanders had to explain why those shortcomings weren't addressed on his watch.

"Well, a fair question. And I think you know the answer is that we have worked on many, many issues, Anderson. And your point is fair that we should've acted sooner," he said. "We should've known what was going on in Phoenix, those long waiting lines and the lies that some administrators were telling us."

But his admission that he missed deficiencies at the agency offered a look at a challenge for Sanders that will likely loom larger as his campaign grows stronger.

Clinton hasn't hit him yet for it, and likely won't in New Hampshire, where polls show him with a large enough lead that she could look desperate unleashing a new assault.

Still, it's evidence there's more material in the opposition research book to use against Sanders. The more it's deployed, the worse he could fare in the head-to-head matchups with Republicans that he so often cites.

Clinton is at her best when she's fielding wonky or philosophical questions with room to explain herself. And twice Wednesday night, she comfortably embraced the role of professor, and turned the town hall into her classroom.

First came a question from a man who is suffering from terminal colon cancer, about assisted suicide.

"This is the first time I've been asked that question," Clinton said.

But she dove into the ethical challenges facing medical professionals confronting the issue, and said with end-of-life treatment improving and human lives lasting longer, she's eager to read more about the ethics, science and religion of it.

She even pointed to a country she'll use as a case study: the Netherlands.Later, Clinton was asked by a rabbi how she stays humble while possessing the ego necessary in presidential politics -- potentially a tough question, but one she sounded eager to answer.

"It basically is practice the discipline of gratitude," she said, explaining that limitations necessitate? reaching out to more people, that critics should be heard.

"But at the end, be grateful. Practice the discipline of gratitude," she said. "And that has helped me enormously."

Sanders doesn't like to talk about himself much. And really, as a candidate vying to lead a forward-looking "revolution," he doesn't have to.

But when he does, it works.

The 74-year-old answered a question about his age by playing up his high school days as a distance runner.

He talked, a bit awkwardly, about his car, which he said is red and "about five years old."

"I have a small Chevrolet. It is one of the smallest Chevys that they make," he said.

Can he do an impersonation of Larry David, who nails Sanders on "Saturday Night Live"? "I am Larry David. And you didn't get it," Sanders shot back.

And asked about the time he was arrested while protesting for the desegregation of schools as a student at the University of Chicago, Sanders described how he got interested in politics in the first place.

"Like in any school you see big kids picking on little kids, you know," he said. "And I resented that. I always did."