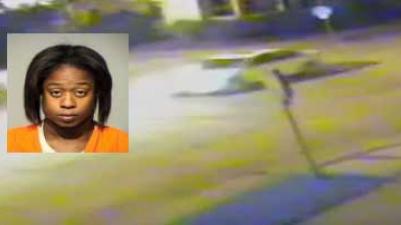 A transgender female escort has been charged in the hit and run death that happened on October 11 in the 500 Block of West North Avenue.

Cashay Henderson, also known as Warren Henderson, has been charged with Hit and Run Resulting in the Death of Temujin Ghangis-Khon Kibo-Gue.

Milwaukee Police had previously reached out to the public for more information on this case after a Nissan Maxima was identified as possibly the striking vehicle.

According to the criminal complaint, Henderson told Police that she works as an escort and drove her car to a client’s house in the area of 18th and North Avenue on October 11.

She left the client’s house and was on her way back home. She was driving eastbound on West North Avenue. She saw the man lying in the street and tried to stop but it was “too late.” She said she was unable to avoid hitting the man. After hitting the man, she left the scene because she did not have a drivers license.

She discovered he had died and she asked “some old guy” to drive her back to the scene. She observed there the man’s body and she knew he was dead. She told police she “lost it.”

Several hours later, she left Milwaukee and went to Columbus, Ohio where she stayed for several days. She then drove to Houston, Texas. She then left Texas, went to Chicago and returned to Milwaukee on October 19.

She stated at the end of the interview she wanted the victim’s family to know that she was sorry.

A witness told police they saw a man lying in the road, and then saw a white Nissan Maxima traveling eastbound on West North Avenue. The Maxima hit the man who was lying in the street. The car dragged the man and when the car stopped dragging the man it turned north at the intersection of 5th and West North Avenue.

A tip to Milwaukee Police led to Henderson. The tip said they had heard Warren Henderson discuss the hit and run. Warren is also known as Cashay Henderson.