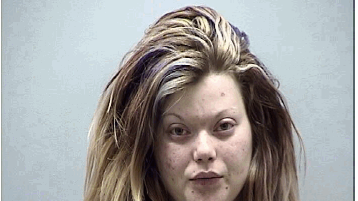 A West Bend woman is facing felony charges after police say she overdosed on heroin with her two year old son in the car.

According to a criminal complaint, it happened outside a Germantown McDonalds on September 9th.

That's when a manager spotted 23-year-old Sierra Schwoegler passed out in the front seat of her car. According to the complaint, the manager spotted a young child crying in the back seat of the vehicle, and called police.

"Our officers responded, found a female unconscious, unresponsive, we weren't able to wake her up," says Germantown Police Lt. Todd Grenier. "We didn't know how long the person was unconscious, how long the child was left unattended in that car, the condition of the child."

According to the criminal complaint, Schwoegler was "sitting in the driver's seat, with the vehicle running, the key in the ignition, and the transmission in the parked position. The defendant appeared unconscious and it was unclear whether she was breathing."

Grenier says officers were able to open the locked car by reaching through a cracked window.

"We ended up administering Narcan, because we knew it was an opiate overdose," he says.

Police found a syringe needle on the center console, along with two cut pieces of heroin, and a phone charger that officers believe was being using as a tourniquet. According to the complaint, the child was unharmed, and turned over to social services before being returned to his father.

According to police, Schwoegler later told officers she had been clean from heroin since 2015, and this was her first time using since then. The complaint says Schwoegler told police "she thought she was taking heroin, but believed that maybe she took fentanyl." The DEA issued a nationwide alert about Fentanyl last year.

Schwoegler is now facing charges of Possession of Narcotic Drugs, and Child Neglect.

"As a father, I mean to have someone arrested with a small child in the car, that's hard stuff to see," says Grenier.