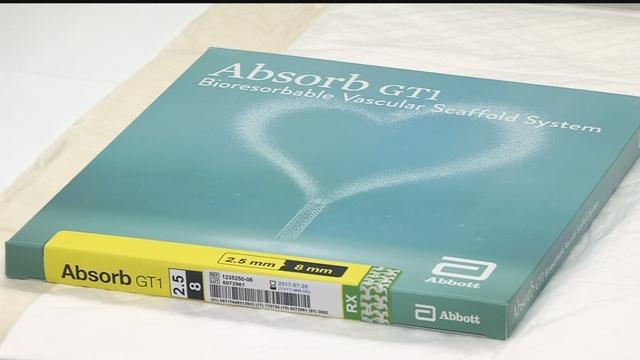 A West Bend man is one of the first in Wisconsin to have a revolutionary new stent in one of his arteries.

Aurora St. Lukes Hospital in Milwaukee is one of only two hospitals in the state that are performing the procedure.

Alvin Klemm already has two metal stents in him after a heart attack in 2011, but his newest one is breaking new medical barriers.

It is called absorb GT1 made by Abbott Vascular.

A stent's job is to open a blocked artery and it takes about a year for the stent to stay open on its own.

This new stent is made with material similar to dissolving sutures or stitches that melts away in about three years. The design received FDA approval in July and it is one of the first big medical marvels in the heart world since angioplasty was introduced in the 70’s and metal stents came in the 90’s.

"There have been better stents over the years, but nothing dramatically different since 1992, 93," Says Dr. Suhail Allaqaband from Aurora St. Lukes Medical Center.

Most insurance cover this procedure and a doctor will probably use it if he or she determines it is medically right for the patient.

"I received the best stent you could possibly get. I'm really lucky and I'm happy about it,” says Klemm who calls Dr. Allagaband the Aaron Rogers of the cardiac team at Aurora.

As he put it, it beats winning the lottery.